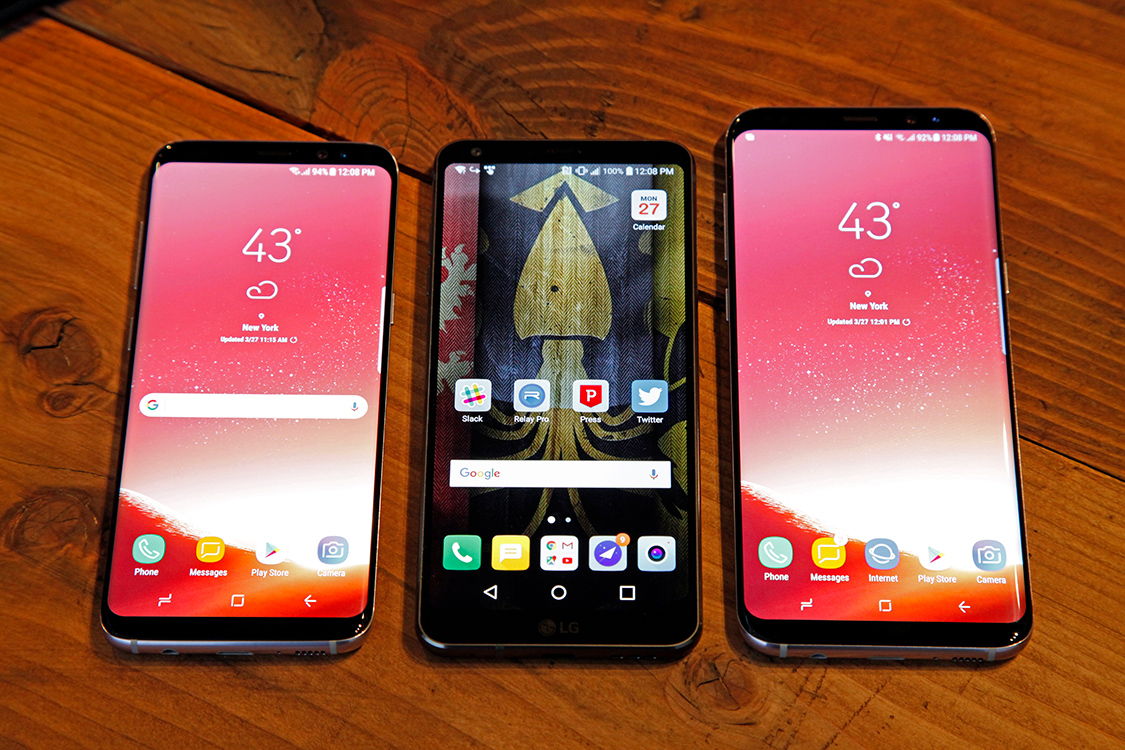 Competing with Samsung at the high-end of the Android smartphone market is very, very difficult. Some might say it’s a fool’s errand. Samsung flagship phones have always offered great performance and best-in-class displays, and the company has really upped its game over the past couple of years in terms of design and materials. Unveiled on Wednesday, the Galaxy S8 and Galaxy S8+ represent Samsung’s best work yet — and if you read our hands-on Galaxy S8 preview, you know just how impressive the new S8 and S8+ are. LG was understandably a bit rattled on Wednesday, and its attempt to steal away some of the limelight fell painfully short.

The LG G6 is a fantastic smartphone. It’s not without its faults, of course, but it will clearly be one of the best smartphones on the market when it’s released early next month. Unfortunately for LG, the Galaxy S8 is better in literally every way. The design is better, the display is better, the specs are better and it’s more powerful. Add to that the fact that the Galaxy S8 will be backed my a multi-billion dollar global advertising campaign, and you’re in a world of hurt if you’re LG.

Of course, LG still has to do everything it can to draw attention away from Samsung’s new flagship phones, and so the company gave it a shot on Wednesday with its “#G6isAUniverseAhead” smartphone showdown. Get it? Because the universe is bigger than… oh, never mind. 😔

Here’s the document LG emailed out to the media: 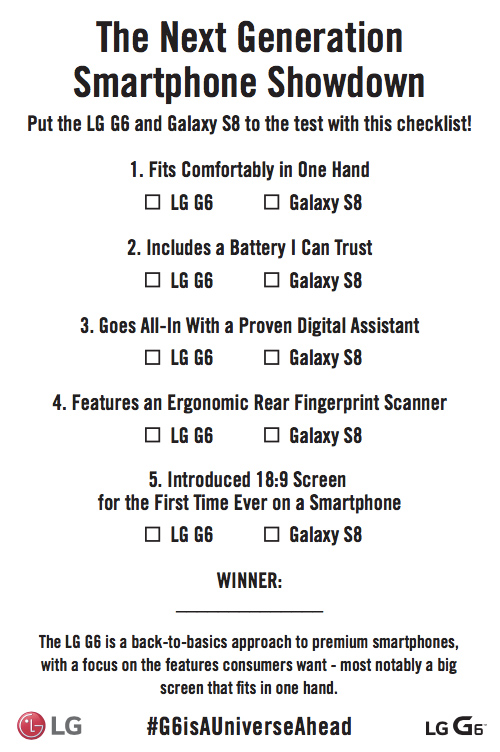 Let’s break this down point by point:

Fits Comfortably in One Hand: I’ve held both phones, and I can say without any question that the Galaxy S8 fits far more comfortably in one hand. Both phones are about the same size, but LG’s bizarre design snafu, which I wrote about in earlier coverage, makes the phone feel a bit awkward in the hand.

Includes a Battery I Can Trust: Zing! I’m sure I would do everything in my power to bring up the Note 7 if I was in LG’s shoes, but a number of recent surveys suggest that most people really don’t seem to care all that much. There will be some people who avoid the Galaxy S8 because they don’t trust Samsung’s batteries. But if I was a betting man, I would wager that number will be miniscule.

Goes All-In With a Proven Digital Assistant: This is a weird one. LG seems to be suggesting that the G6 is better because Google Assistant is the only digital assistant on the phone. On the other hand, Samsung’s new Galaxy S8 and Galaxy S8+ ship with the company’s new unproven Bixby assistant. But if you hold down the home button on the S8 or S8+, guess what pops up. Yup, Google Assistant.

Features an Ergonomic Rear Fingerprint Scanner: The LG G6, Galaxy S8 and Galaxy S8+ all have fingerprint scanners on the back of the phone. I’m not sure what would make the G6’s sensor any more or less ergonomic than the S8’s sensor.

Introduced 18:9 Screen for the First Time Ever on a Smartphone: We wrap things up with yet another weird one. The G6 will be released globally on April 7th. The Galaxy S8 and Galaxy S8+ will be released globally two weeks later on April 21st. I’m not sure there’s a soul out there who actually cares which phone was the first to introduce an 18:9 screen, but assuming these people are out there, we’re talking about a difference of 14 days.

LG has had a rough time competing with Samsung over the past few years. Things will not get any easier in 2017.