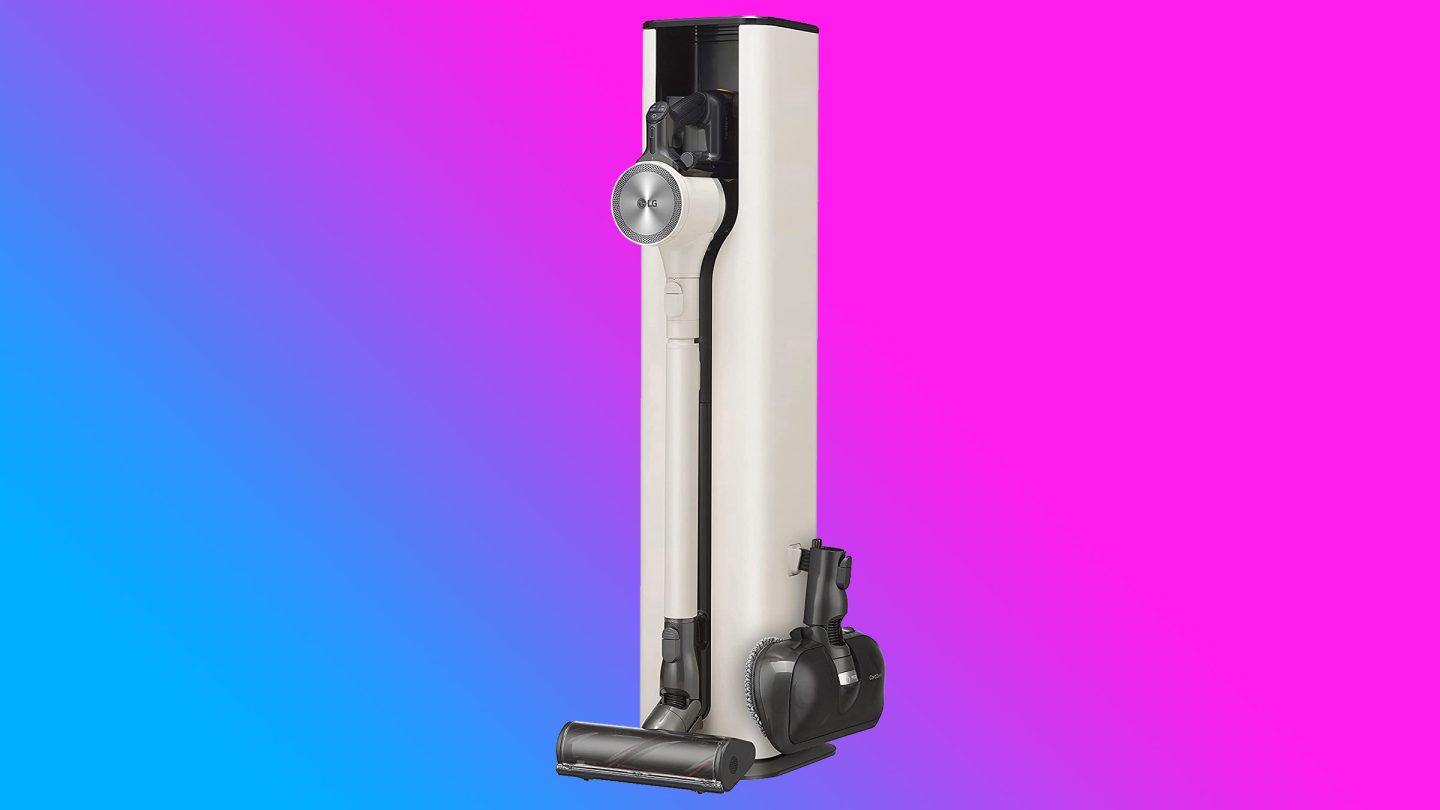 The LG CordZero vacuum cleaner is by far one of the best cordless stick vacuums I have ever tested. That’s saying a lot since I have tested more than 30 different stick vacuums over the past few years.

The LG CordZero A939KBGS vacuum is powerful and it has impressive battery life. Also, this model comes with a fantastic auto empty tower dock that makes cleanup a breeze. The CordZero A939KBGS includes a mopping attachment as well, in addition to all the other accessories in the box. Plus, you get some unique features that are missing from most rivals.

The newest LG CordZero vacuum is the company’s most powerful model yet. LG’s CordZero A939KBGS also features an auto empty tower to make cleanup a breeze. 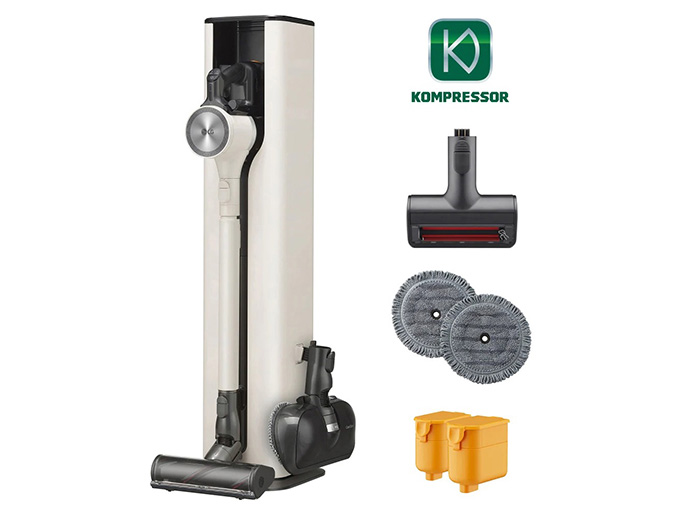 There are several key features that set the CordZero A939KBGS cordless stick vacuum apart from the competition. And the biggest difference isn’t actually anything on the vacuum itself.

Instead, it’s the awesome all-in-one tower dock that comes with LG’s newest and most advanced cordless stick vacuum. That’s why it’s the first thing I want to discuss in this review.

There are three main functions of the tower docking station that comes with this vacuum. And the first one is fairly obvious: it holds and charges the A939KBGS vacuum when you’re not using it.

In addition to the vacuum itself, the all-in-one tower also stores every single one of the vacuum’s accessories. That’s the second main function of the tower. It organizes all the attachments as well as an additional battery, which is kept fully charged.

All but one of the accessories are stored inside the doors on either side of the tower. This results in a nice clean look. If you want to keep the mopping attachment accessible, however, it rests on a hook on the outside of the tower.

The image at the top of this review shows what the mop attachment looks like on the side of the tower. This obviously ruins the streamlined look, but it’s not bad if you have the tower tucked away in a corner.

Also of note, the tower is tall, but not as tall as a regular cordless stick vacuum. That’s because the LG CordZero A939KBGS has a telescoping wand that retracts to the shortest position when stowed.

Auto empty is a killer feature

Last but certainly not least is the third and final main function of the tower. When you’re done using the LG CordZero A939KBGS vacuum to clean up around the house, the tower has an auto empty feature to clear out the vacuum’s dust bin.

This feature is fantastic and it works just like a self-emptying robot vacuum. When the CordZero stick vacuum is docked, the tower can suck all the dirt and dust out of the internal bin.

LG says the tower’s disposable vacuum bags each hold up to three full loads of dirt and dust. I have found that the bags actually hold about twice that much, including plenty of dog hair.

Clearing out the bin is the most annoying part of using any cordless stick vacuum. For that reason, the all-in-one tower with auto empty is definitely one of the best things about the CordZero A939KBGS vacuum. 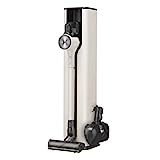 It’s great that the LG CordZero vacuum has all these nifty bells and whistles. But it goes without saying that the most important factor is how it performs as a vacuum.

Good news: the LG CordZero is an excellent vacuum with top-tier performance and powerful suction.

My home happens to be the perfect place to test vacuums. I’m not a slob or anything, but I do have a dog that sheds constantly all year round.

If a vacuum can handle my pup’s long hair without getting tangled or leaving any behind, it’s a solid vacuum. And I’m happy to report that the CordZero A939KBGS is indeed a solid vacuum.

The LG CordZero vacuum performed great on wood flooring and on the tile in my kitchen and foyer. More importantly, it pulled all the dust and dog hair out of my carpets and rugs.

LG’s Inverter Motor is extremely powerful. It’s also efficient since the CordZero A939KBGS battery lasts for 60 minutes on a full charge. Add in the second battery and you get up to 120 minutes of vacuuming.

And don’t worry about needing to empty the vacuum multiple times if you use it for extended periods. LG’s Kompresser lever lets you compact all the dirt and dust in the bin to make extra room for more.

Additionally, it’s worth noting that the LG CordZero is a very capable mop. The powered spinning mop pads do a great job of scrubbing away messes. There’s also an internal water reservoir so you don’t have to worry about dunking a mop into a bucket.

Boost power when you need it with the turbo button

Back to vacuuming, there’s a turbo button to give the vacuum an extra boost when you need it.

Many premium models these days automatically increase suction power when they detect excessive amounts of debris, but the LG A939KBGS does not. Personally, this doesn’t bother me at all since I’m not a fan of that feature.

Automatic suction adjustment is reactive, not proactive. In practice, that means the excessive debris has already been vacuumed by the time suction is boosted. That defeats the purpose.

It’s a neat idea, but I find that auto suction adjustments don’t really help in the real world. So, the fact that the LG CordZero is missing this feature isn’t a shortcoming in my opinion.

That being said, there are a few shortcomings that are worth mentioning.

Shortcomings you need to know about

Overall, there’s no question that the LG CordZero vacuum is among the best of the best. But there are a few things that people might not like about this model. Two are fairly important, while the third is just a minor annoyance that probably bothers me more than other people.

Starting with the minor issue, I personally don’t like the fact that the tower’s disposable vacuum bags use plastic closures.

I’m a huge fan of the convenience that auto empty affords. I have three robot vacuums in my home and they all have self-emptying docks. But just like coffee pods and other disposable convenience products, the disposable bags used in auto empty vacuums create additional waste.

In the case of most robot vacuum brands, the self-closing tab on each bag is made of cardboard. LG’s bags for the CordZero tower use hard plastic instead, similar to iRobot’s Roomba bags. Cardboard is at least biodegradable, unlike plastic. Some people won’t care about this, but I do.

As I mentioned, that’s a minor issue that won’t affect most users. But the other two strikes against the LG CordZero vacuum are more important.

First, the brush head on the CordZero A939KBGS does not have any LED lighting. In this day and age, there’s no excuse for that omission. LED lighting is a tremendous help in ensuring that you don’t miss any dust, dirt, or pet hair.

And second, the LG CordZero is very expensive.

Of course, Dyson vacuums don’t come with auto empty towers like this vacuum. Plus, the LG CordZero doubles as a powered mop.

As I mentioned at the start of this LG CordZero vacuum review, I have tested more than 30 different cordless stick vacuums in recent years. During that time, I have come to a few main conclusions.

First, Dyson is still the market leader in terms of power and performance. The company has tons of competition though, and it’s no longer a leader in innovation. The LG CordZero A939KBGS vacuum is the latest example of that.

As a matter of fact, the LG CordZero has officially replaced my Dyson cordless stick vacuum.

LG’s latest and greatest vacuum comes very close to matching my Dyson in both power and performance. Then, it beats my Dyson in every other area. It has a better design and better features. On top of that, the all-in-one tower with auto empty pushes the CordZero over the edge.

I can’t see myself ever going back to a cordless stick vacuum without a docking station like this one.

The tradeoff, as I mentioned earlier, is that this model is very expensive. You can buy a perfectly good cordless stick vacuum these days for $250 or even less. If you want the best of the best, however, you’ll need to pay a premium.

Dyson customers have known that for a long time, but the LG CordZero is even more expensive than any Dyson. It’s worth the added expense though because it has so many features that you won’t find on any Dyson.