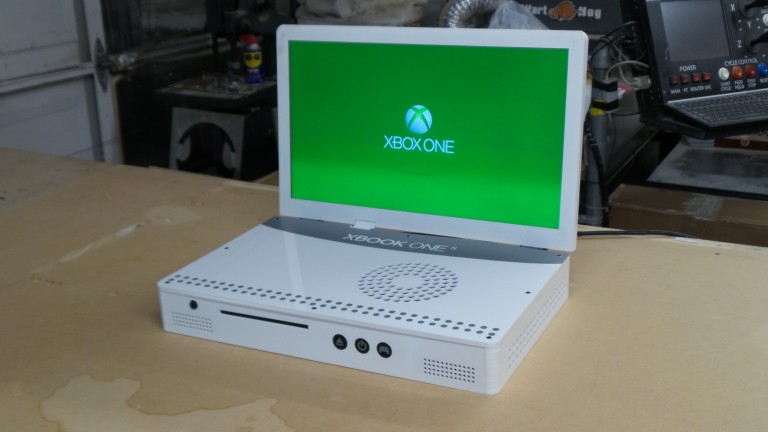 Earlier this month, Microsoft released the Xbox One S, a console that has a smaller footprint than its predecessor, but also comes ready to offer some neat additional features. However, you still need to hook up the Xbox One S to a TV set and a power supply to play games, and you can’t take it with you on the road. That’s unless you hire Eddie Zarick to build you an Xbook One S, which is exactly what you expect: an Xbox One S laptop.

If this sort of contraption sounds familiar, that’s because it’s not Zarick’s first such product – check out this laptop that combines an Xbox One and a PS4.

However, the new Xbox One device is smaller than previous machines, and thus more portable.

Inside the base of the laptop, you’re going to find the internal components of the Xbox One S, which are connected to a 19-inch Samsung TV. Even though it’s a new form factor, the Xbook One S should offer you the same experience as the regular Xbox One S.

You can still hook up the laptop to a different TV if you so desire – and you’ll probably want to do it while at home.

But what this laptop doesn’t get is a battery. Instead, you’ll still have to hook it up to a power source when travelling, which means you won’t be able to play it outside as long as you don’t have power.

Pricing for such a system is $1,495 for an Xbox One S system with 500GB hard drive or $1,195 if you bring your own console. Shipping is going to cost you an extra $150. However, you should know that Zarick’s mods are not officially supported by Microsoft, so in case anything goes wrong with the console, you might have warranty issues.

That said, the following video shows you everything you need to know about this Xbox One S laptop, with more details (including a giveaway) available at the source link.