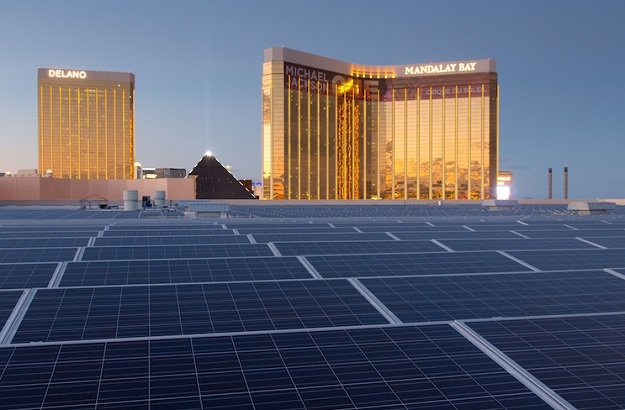 People like to say that Everything is bigger in Texas, but the adage might apply more appropriately to Las Vegas. Vegas is that uniquely American city where over the top extravagance is the norm and arguably unrivaled by any other city across the globe. In short, Las Vegas is a city that can aptly summed up with a singular adjective: Big.

Big hotels, big fights, big money, big stars, larger than life shows — that’s Vegas. Which is why it’s not all too surprising that Las Vegas is now home to the largest solar roof in the entire world.

Stretching out across the roof of the Mandalay Bay Convention Center are 26,000 solar panels, the culmination of an environmentally friendly initiative that began about two years ago. In recent years, a handful of casinos in Vegas have began exploring solar energy as a means to help keep costs low. According to a press release touting the completion of the project, Mandalay Bay’s solar set up is capable of generating enough electricity to power upwards of 25% of the building’s electricity needs.

At full tilt, the solar roof atop the Mandalay Bay Convention Center will reduce the C02 output in the area by 8,400 metric tons. Put differently, that’s the “equivalent of taking more than 1,700 automobiles off the road.”

The initiative was completed with assistance from NRG Energy, a large energy company based in Texas and with operations across a number of U.S. states.

“MGM Resorts International has a long history of integrating environmentally responsible practices throughout our operations to help preserve the planet’s limited resources,” Cindy Ortega of MGM said in a press release. “Our continued partnership with NRG is a source of pride and inspires our desire to continually implement innovative solutions that promote renewable energy.”