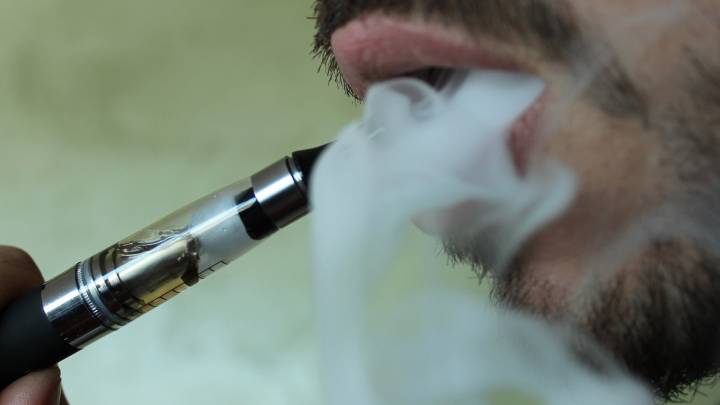 Many former smokers have taken to vaping as an alternative to cigarettes, believing the vaporized juice to be safer than burning tobacco. In an incredibly bizarre twist, a 38-year-old Florida man has died due to what authorities are calling a “projectile wound of the head” which was caused by his vape device. Tallmadge D’Elia’s death is being called the first fatality linked to e-cigarettes, but officials still don’t know exactly how it happened.

D’Elia was found dead after a fire in an upstairs bedroom of his family’s home. He suffered burns to most of his body, but authorities don’t believe the fire was what caused his death. As ABC reported, investigators believe that the vape device D’Elia was using may have exploded, possibly due to a faulty battery or charger. The latest report blames the gadget for producing the projectile that ultimately killed him and sparked the fire that followed.

The device which D’Elia was using at the time of his death was produced by Smok-E Mountain, a Philippines-based vape manufacturer. Vape companies are a dime a dozen, and most of the hardware is virtual identical regardless of which brand you choose.

In past cases where e-cigarettes have exploded or ignited, the battery is typically blamed. Some e-cigarettes have built-in batteries while others have swappable batteries which are charged on an external unit. Cheap, generic lithium-ion batteries can be found everywhere from local vape shops to Amazon, and assuming that there’s any kind of quality control in their manufacturing is a fool’s errand.

An exploding battery can be an incredibly dangerous thing on its own, and when it’s packed tightly into an all-metal vape it’s easy to see how it could produce flying debris. Officials are ruling the death an accident, but that’s hardly comforting for D’Elia’s friends and family.

Battery technology has come a long way in recent years, but it still has a long way to go when it comes to safety. New advancements in safer rechargeable battery tech have popped up occasionally but none of them have managed to penetrate the market thanks to the low cost and widespread adoption of the more combustible standard.