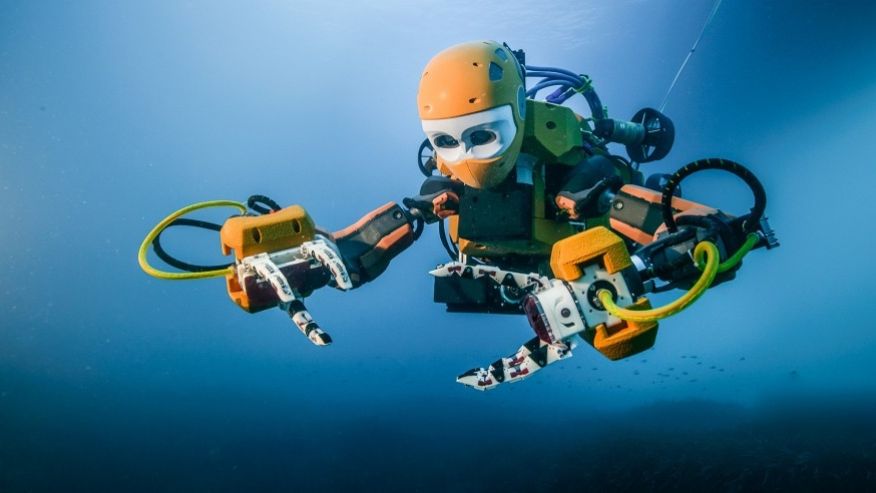 A professor at Stanford University has designed a robotic humanoid diver with articulated hands that is designed to be an underwater avatar, exploring the way a human would— while its driver remains safely up at the surface.

The robot, which measures about five feet long, uses artificial intelligence and also a haptic feedback system to provide its controller with a feel for what the robot is holding. While the front part of the submersible resembles a human, the back part features computers, batteries, and thrusters.

“OceanOne is aimed at bringing a new capability for underwater exploration,” Khatib said in a video showcasing the robot’s abilities, in which it manipulates objects like a red basket. “The intent here is to have a diver, diving virtually, creating a robot that can be the physical representation of the human.”

“It has two hands. It has stereo vision,” he added. “And the most amazing thing about it, is that you can feel what the robot is doing, while [you are] sitting up on the boat.”

Stanford said in a statement that the humanoid is designed to go places that might be too deep or too hazardous for people— like doing maintenance on an oil rig— so that the humans can stay safely on the surface.

The bot’s first trip had it exploring a 17th-century wreck off the coast of France, where Stanford said that OceanOne, with Khatib at the controls, picked up an ancient vase and deposited it carefully into a basket over 300 feet below the surface.