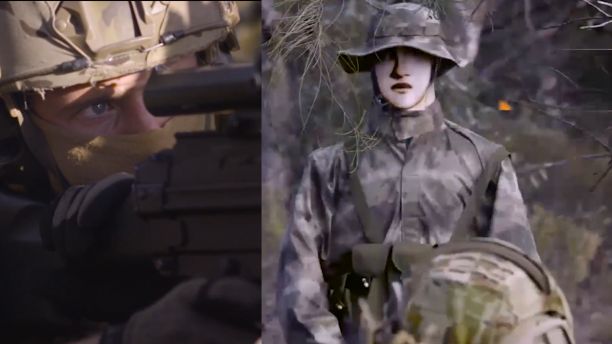 Millions of rounds can be unleashed at these robots and they’ll keep going on going. In part because they have state of the art armor, but also because these robots can think and behave like the enemy … and avoid getting shot.

While it sounds like a “Terminator 3: Rise of the Machines” scenario, Special Operations Forces around the world are leveraging the abilities of the cutting-edge Marathon Target robots to challenge and enhance their skills.

Robots that think, communicate with each other and fight as a team …this is the future of land combat and the future is nearly upon us. These robots are currently used for advanced training – not for deployment in combat.

Robotic Opposing Force (ROPFOR), comprised of Marathon Target robots, can replicate the tactical maneuvers of any human enemy force on the battlefield.

Right now, they are being used to challenge- and sharpen- a warfighter’s response to dynamic and evolving tactical situations.

Related: The ‘Sea Wasp’ will be a potent threat to terrorists and their underwater bombs

The technology is not there yet for humanoid combat machines like ‘Terminator.’ But the AI on these robots could be key to the evolution of Terminator-style technology.

By going up against these robot teams, small units have the chance to work against thinking targets who will act unexpectedly and unpredictably like human threats.

This is a modern way to train, but also a great way to rehearse missions – whether it is a hostage rescue or the capture of a terrorist.

In urban operations training, the robots play the role of the enemy – an enemy that can think on its wheels, so to speak – and work as a team to challenge assault team tactics and techniques.

The robots can also be used to challenge snipers working in settings such as urban hides. In another example, snipers can go against the thinking robots while practicing aerial target engagement from helicopters.

The robots may not have legs but they effectively simulate how humans move during close-quarter battle scenarios.  A robot alternate speeds – one minute traveling at a sprint then standing still and breaking back into a run. Like humans in a combat scenario, they will also move in unpredictable directions.

For combat scenarios with a mix of civilians, friendly forces and enemy forces the robots can be dressed as civilians or represent friendly force elements.

In these scenarios, the robots could also react like civilians. In a hostage scenario, for example, the ‘hostage’ could react to rescue in any number of ways ranging from sinking to the ground crying, through to bolting off in an inconvenient direction.

In every scenario, terrorists are not going to conveniently behave like widely-used stationary paper or predictable track targets. The robots can play a vital role in sharpening soldiers’ threat discrimination and rules of engagement.

Why aren’t they humanoid?

The technology is not there yet and, for training purposes, it doesn’t need to be.

In addition to marksmanship training, the robots are excellent for mission practice in urban settings and are frequently used to practice room clearing, for example. However, there are limitations – they can’t climb stairs yet so robots have to be placed in advance on other floors and are limited to movement on those floors.

Nonetheless, the robots can also tackle uneven, wooded terrain which is handy for snipers. The robots look like human shaped targets when observed at range.

Take convoy protection, for example, the robots can be taught how the enemy behaves … so the robots will replicate how the enemy conducts movements, formations and rendezvous. This way, snipers can refine their target acquisition skills in advance. It is a whole lot more challenging than a paper target.