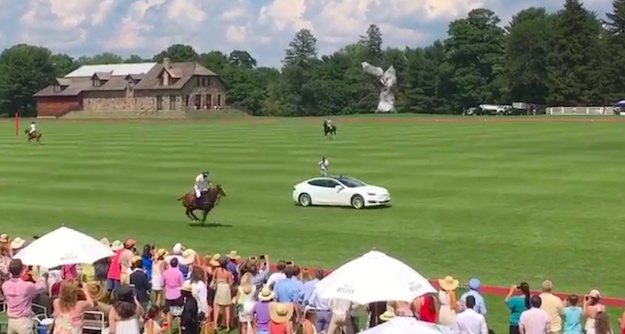 As far as Tesla race videos are concerned, we thought we had seen it all. Sure, we’ve seen the videos of various Tesla models taking on all sorts of supercars, from a Model S getting absolutely torched in a race against a McLaren 650S to a Model S getting put in its place by the speed demon that is the Lamborghini Huracan. Hell, we’ve even seen video of a Tesla Model S going head to head with a Boeing 737. It doesn’t get more ridiculous and absurd than that, right?

In something seemingly lifted out of a FOX reality show circa 2003, a video which surfaced over the weekend showcases a Tesla Model S going head to head with a Polo Pony, or in other words, a horse specifically bred to be agile, quick, and fast.

So is there actually something of a race here?

But it’s still a whole lot of fun to watch, especially because the race was structured like a relay, as you’ll see in the video.

As for the matchup, horses typically run anywhere from 25-30 MPH, and some thoroughbreds have even been known to push the pace and clock times as fast as 40-45 MPH. But come on, we’re talking about a horse versus a car — a Tesla, no less! — so the race plays out exactly as you might expect. Still, there’s something quirky and bizarrely entertaining about someone a) thinking this idea up in the first place and b) actually taking steps to turn the idea into a reality.

You can check out the race below.

And believe it or not, this isn’t the first time a horse has gone up against a Tesla. A cursory YouTube search reveals that the Greenwich Polo Club in the U.K. kicked off the polo season with a Model S P85D taking on the club’s fastest horse.

What a time to be alive!