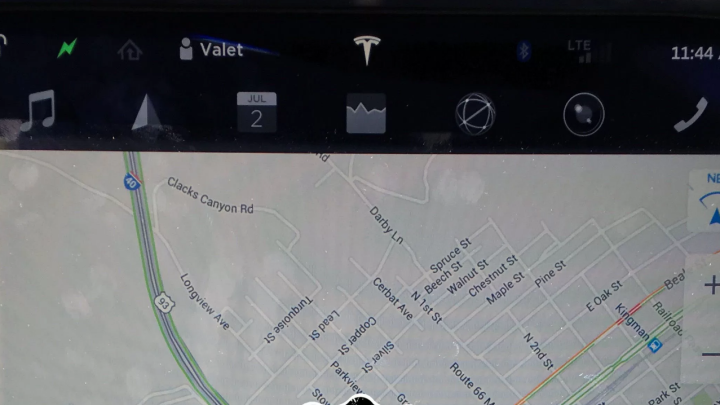 It’s no secret that Tesla is coming out with a new v8.0 version of the software for the Model S and X. Among the features should be a new, less crashy Autopilot, better voice controls, and a completely revamped UI.

Details about the visual redesign have leaked out, and now alleged screenshots of the new UI have found their way to the ever-active Tesla forums.

From what we can see, the redesign follows the general trend of design language in the tech industry these days. Gone are the 3-D icons that used to litter the interface, with new flat icons that meld into the dash rather than stand out.

It’s much more reminiscent of Google’s Material Design (or the langauge Apple moved towards with iOS 7), and works well with Tesla’s overall minimalist design. It also has the side benefit of making the Model S’s giant center touchscreen look less like a glorified TomTom.

Other details translated from the forum by Electrek claim that the new top row will auto-hide, some of the colors have been stripped out to give a more monochromatic feel, and a revamped Media player.

Overall, it actually reminds me a lot of the center touchscreen on the new Volvo XC90 — dark, monochromatic design, and the top-to-bottom tabs anchored by the climate control system. I don’t think it’s so much about Tesla copying, as maybe we’ve just found the best design for a touchscreen car computer.