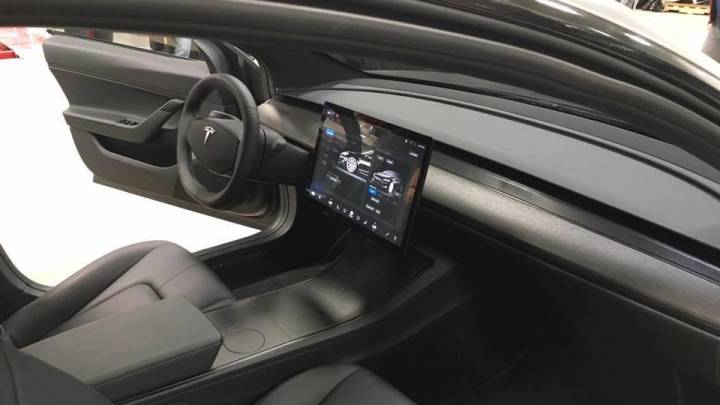 Although Tesla has officially launched the Model 3 (and hundreds of thousands of people have put down $1,000 to reserve one), we still don’t know exactly what it looks like.

Helping to fill in the gaps are some new prototype photos, leaked yesterday on Reddit, which show off the interior surprisingly clearly.

DON’T MISS: Brexit: when democracy feels like it doesn’t work

As the pictures show, Tesla has really re-thought what the interior of a car should look like. There’s no instrument cluster or central buttons. Instead, everything is controlled by a “floating” 15-inch display, placed between the driver and passenger. There’s also speculation that the lack of an instrument cluster means the Model 3 will have a heads-up display to show speed, turn-by-turn navigation and battery charge.

The new interior photo shows a clean, all-black design with zero clutter. Some have speculated that the minimalist interior, with few physical driving controls, points to a self-driving capability for the Model 3. Since Musk said that the interior “would make more sense” in the future when he launched it, that’s not a bad guess.

Alongside the new photos, we also found a video that seems to show a similar prototype Model 3 doing road testing on a highway. It’s shadowed front and back by Model S cars, so this is either the weirdest group ride in history, or a legitimate road test.

Tesla wants to deliver up to 200,000 Model 3s by late 2017 and produce some 500,000 vehicles in the following year, including Model 3, Model S, and Model X. It’s an ambitious plan for a car that isn’t even in final design stages yet, but hopefully Tesla can pull it off.