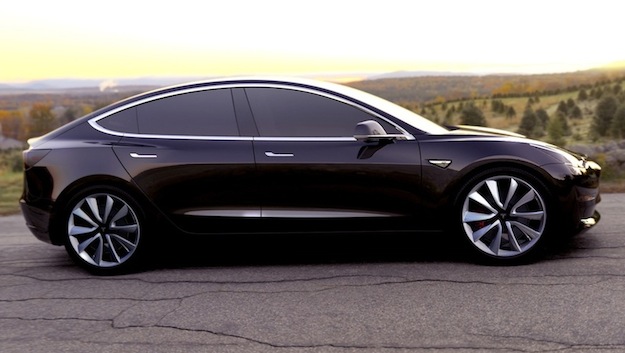 Tesla’s Model 3 introduction last week couldn’t have gone any better. Thus far, consumer interest in the Model 3 has been beyond exceptional, with the most recent tally indicating that more than 276,000 people have already put down $1,000 to secure a reservation for the car.

While Elon Musk has promised us that there will be more announcements about the Model 3 in the months to come, there’s one unique aspect of the Model 3 that, for whatever reason, hasn’t really attracted that much attention. Put simply, the Model 3 lacks an instrument panel (or instrument cluster as it’s called in the industry), a fixture of nearly every car that has ever existed.

As you can tell from the photos below, the only source of information about speed, range and other pertinent vehicle information is on the Model 3’s 15-inch center display.

If you want to see how fast you’re going, you can’t quickly glance straight ahead like you’re accustomed to. Rather, you have to look a bit to your right and to the upper left hand corner of the display where a dedicated area will inform you as to your current speed.

And a view from a better angle.

The reasoning behind Tesla’s design choice here has elicited two likely explanations. One, in a world where autonomous driving is commonplace, the need for a traditional instrument cluster is diminished. And two, removing the instrument cluster altogether is simply a means for Tesla to keep the cost of the car down.

In the wake of the Model 3 unveiling, many have optimistically speculated that maybe Tesla simply didn’t have time to put in a digital dash ahead of time. After all, the production car that rolls off the line in late 2017 will undoubtedly be more advanced than the working prototype Tesla introduced last week.

Unfortunately, Tesla reps, when asked about this during the test drive portion of last week’s event, indicated otherwise.

In the video below, at about the 55 second mark, Casey Spencer asks, “So do you think the fact that there’s no instrument cluster is actually going to make it to the production model?”

The Tesla rep then responds emphatically: “Yes. This is not a show car, this is an engineering prototype. This is our first engineering validation car that we’re working on. We’re actually doing drag testing with it, and we really wanted to make it production representative so it was useful… we don’t have time, it’s only a year and a half, we have to go with this.

All the same, some have also speculated that Tesla might make a HUD option available as an add-on by the time the Model 3 begins to ship.

Interestingly, a prospective Model 3 buyer over the weekend asked Elon Musk about the lack of a traditional dash. Musk coyly responded, “It will make sense after part 2 of the Model 3 unveil.”

And as a final point, you may have noticed that the Model 3 steering wheel is uncommonly bare. Not to worry, Musk also addressed this via Twitter.