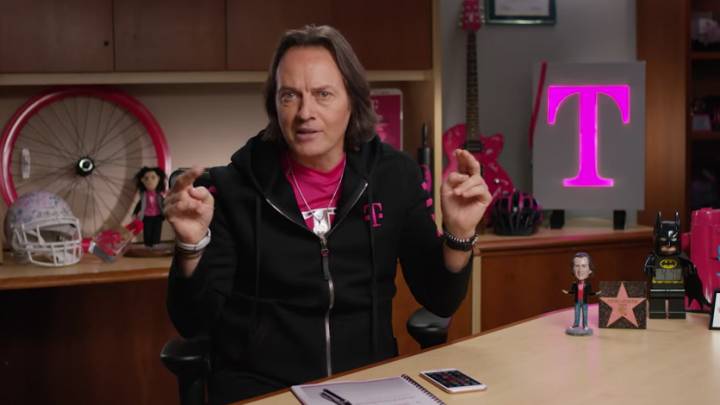 The running battle between T-Mobile and Verizon has heated up in the last day. As of this morning, Verizon has an unlimited data plan that actually competes on features and price with T-Mobile. For heavy data users, it actually looked better, thanks to HD video streaming and generous mobile tethering.

But T-Mobile’s feisty CEO John Legere doesn’t like being publicly shamed, so he took to Twitter to announce some changes to T-Mobile’s ONE plan that should put the company back in front.

According to Legere’s tweets, T-Mobile One will now include HD video streaming and 10GB of mobile tethering for every customer, every month. Those used to be add-ons that you’d have to pay $25 per month to get as part of T-Mobile’s pricier plan.

Adding those changes onto T-Mobile One should push the balance back in T-Mobile’s direction for heavy data users. As we outlined earlier today, T-Mobile’s plans are significantly cheaper, especially if you have a couple lines. Previously, T-Mobile One didn’t include any 4G hotspot data, but rather only let you tether at 512Kbps, which is too slow to get real work done.

8/ And, how about a little promo to make it EVEN MORE compelling?! $100 for two lines on #TMobileONE ALL IN.

Legere also announced that two lines on T-Mobile One now costs $100 rather than $120, but it’s unclear if that is a temporary promotion or T-Mobile’s new base pricing. If that’s just the standard pricing, then couples looking for a joint plan should have their problems solved.

Update: a T-Mobile statement says that “right now, for a limited time at T-Mobile, you can get 2 unlimited lines of T-Mobile ONE with taxes and fees INCLUDED for only $100!” Unfortunately, that means that the lower price for two lines is just a temporary promotion.