T-Mobile has a habit of going big when it comes to discounts, so it’s not all that surprising that it’s going hard for Black Friday this year. The deals that the network just announced look like the cheapest way to get a good smartphone and cell service that we’re going to see all year, so provided you can withstand John Legere’s disturbing enthusiasm, it’s time to dive in.

The headline deal here is a trade-in program for old phones. T-Mobile is offering upgrades to top-tier flagship phones — namely, the iPhone 7 and Samsung Galaxy S7 — provided you trade in a paid-off last-gen smartphone.

In other words, if you own an iPhone 6s or a Samsung Galaxy S6 (or similar), you can upgrade to an iPhone 7 for free. If you have an older phone, you can still get a good trade-in deal, you just have to pay a little cash. $100 gets you from an iPhone 6, Note 4 or Galaxy S5 up to an iPhone, or it’s $350 if you’re coming all the way from an iPhone 5 or 5c. The same deals apply for upgrading to a Galaxy S7 or LG V20.

The only caveat is you need to be on T-Mobile’s One or Simply Unlimited plans to take advantage of the trade, but those aren’t exactly bad data plans.

If you’re clever, you can use this deal to get a cheap iPhone without even having an eligible trade-in device. You can get a used iPhone 5 or 5c for around $100 these days; add that to the $350 trade-in price, and you could get an iPhone 7 for $450, which is one hell of a deal. 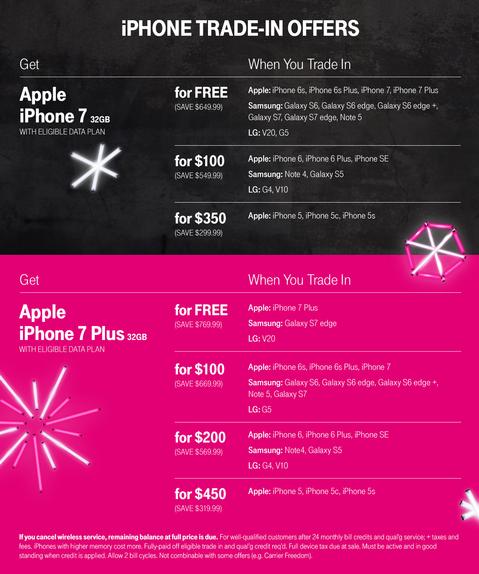 There’s more than just nice trade-in deals, too. T-Mobile is trying to incentivize you to switch numbers by offering $200 in cash per line you switch. The cash isn’t a bill credit, either — it’s on a prepaid Mastercard, so you can use it to buy things that aren’t magenta-colored. The per-line credit means that if a family of four or five switch, you could be looking at $1,000 in cash.

Finally, T-Mobile has a goodwill gesture for everyone out there: it’s giving everyone who flies from now until Saturday a free hour of GoGo in-flight wi-fi.