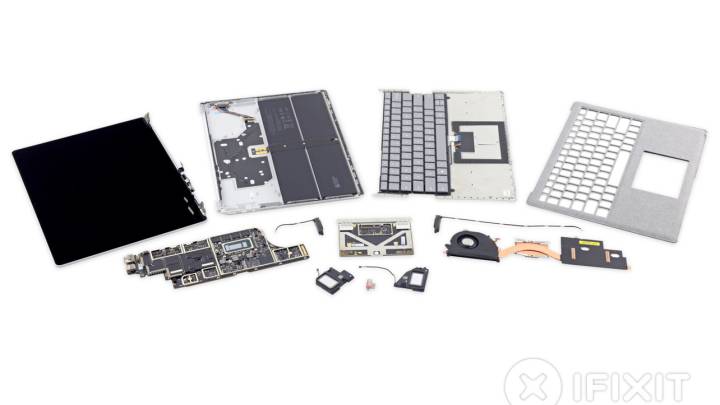 Microsoft’s Surface Laptop has gotten plenty of attention since its reveal early last month. The device is Microsoft’s first true laptop in the Surface line, and with its fabric-covered keyboard, and streamlined Windows 10 S installed, it’s most certainly an acquired taste. As always, repairability is an important aspect to consider when dropping a thousand bucks on a piece of electronics, so we turn to iFixit’s brand new teardown video to get an idea of just where it stands. The results are truly abysmal.

As you can see from the video — and you most certainly should watch it, because it’s hilarious at the very least — the laptop is essentially unrepairable. With no external screws or any kind of obvious way in, the teardown was performed the only way it was possible: by forcing the fancy keyboard to take a leave of absence. The fabric-covered inner casing is virtually impossible to remove, and when it was finally freed from its ample adhesive, it was basically completely destroyed.

Likewise, the internal components are a huge pain to remove, and the battery is absolutely no designed to be replaced, even by a professional, and even if you’re trying to swap out some of the slightly more easy-to-reach bits and pieces, working on it all while having the battery still plugged in is always a terrible idea.

The notebook, which was already skating on thin ice thanks to a notoriously low string of repairability scores on past Surface-branded devices, somehow managed to actually perform worse. iFixit ended its testing by giving the Surface Laptop a firm 0 out of 10, while noting that there’s really no way to repair it and that it shouldn’t ever be attempted.