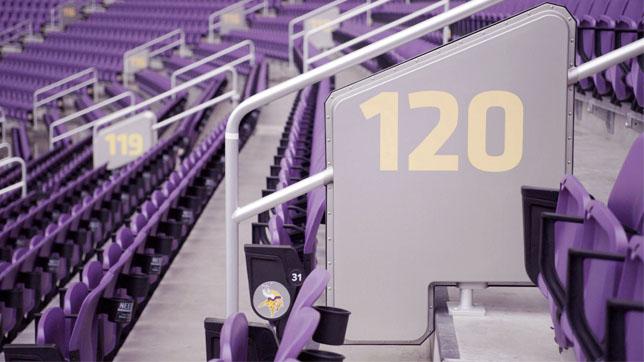 Cities will compete to host the Super Bowl, in some cases using public money to fund a brand-new stadium in hopes of attracting the NFL. But while it’s well-documented that hosting a Super Bowl is good for tourism and great for the mayor’s political ambitions, there’s one more benefit that’s often overlooked: Hosting the Super Bowl will transform a city’s wireless network for years to come.

The Super Bowl is a unique event for network operators. “I don’t think a lot of people appreciate what a Super Bowl brings to a city,” Verizon’s network VP Brian Mecum told me. “To give you perspective, we start about two years out with our preparations.” For all the carriers, those preparations include running new fiber lines, upgrading existing cell towers, installing new small-cell sites, and also focusing attention on places like the train station, airport, and the stadium itself.

The stadium where the Super Bowl will actually be played is obviously the first consideration. All the carriers, led by Verizon, have built out a Distributed Antenna System that blankets the stadium in coverage. In addition to all the visible antennas, including two dome-shaped Matsing Balls antennas hung on the ceiling, there are also antennas hidden inside the hand rails and drink rails. “It doesn’t matter where you’re at, you’re going to be able to get access to an awful lot of spectrum,” Haberman said. “No matter where you’re at in the stadium — people pay more for the seats up front — but we want people in every section of the entire stadium to be able to experience the same advanced LTE as anybody else in the stadium.”

Hosting the Super Bowl puts stress on networks far beyond a regular sporting event, and wireless operators have to be set up to handle the traffic. “We’ve seen in other big sporting events that are non-Super Bowl — just a regular game that’s sold out– we see a consistent level of traffic, but it doesn’t spike like we see in the Super Bowl,” Scott Santi, Sprint’s VP of Network Deployment, told me. “We expect a lot of people taking pictures, streaming some videos and sending them off to their friends at this  special event. That obviously is going to be lot of usage on the network and we will see a big spike where we probably don’t see that in a regular game.”

“The only thing comparable to the Super Bowl is when the Pope comes to town,” Santi told me. The volume of traffic and spike in visitors might be similar, but how the networks approach the problem is very different. “When the Pope came to town, we knew that the artery that the Pope was going to be taking, and we dropped in a lot of [Cells On Wheels] and temporary solutions, because we have the time to prepare and we know that that traffic dissipates really quickly when the Pope goes away, and we don’t need all that capacity long-term.”

But virtually everything that networks build for the Super Bowl sticks around. “In a Super Bowl venue like Minneapolis, all that infrastructure will stay in place and it will be obviously great for the customers of ours in Minneapolis, because their network experience is going to be really superb and we’ll keep the infrastructure there. Financially, it doesn’t make any sense to take it out so we’ll leave it there ,” Santi said.

Verizon and AT&T will also be leaving their infrastructure in place. “There’s a thought some people approached me with, and they’ll say ‘Okay, so you put all that infrastructure in, but then you take it out, right?’ The answer is no, absolutely not: that’s something that we leave behind,” Verizon’s Haberman said. In San Francisco, which hosted the Super Bowl two years ago, that meant a dense network of small cell sites built downtown, which remains to this day. “You get more efficiency, and the equipment we used is smaller: you can just hang remote radio antennas on light poles, and then they all home run back to a centralized radio hub. We’re very proud of  what downtown San Francisco has now: You can use your phone anytime you want and have a great experience on Verizon, it’s very reliable, you can get on the network, it’s very fast, and that’s because that centralized radio architecture was built for a million extra visitors and it’s still there: We left it in place.”

It’s not just the downtown core, the hotels, and the stadium, either. Hosting a Super Bowl means a city gets bumped right to the front of the queue when it comes to deploying new network technology. “Hosting the Super Bowl is an opportunity for a city to get an advance on the investment we put into our network,” Warren Salek, an AT&T network VP who oversees this part of the country, told me. “A city moves to the front of the list, and we spend more money there sooner than we would’ve if the event wasn’t there. We started our small cell deployment [in Minneapolis] as soon as we started planning, all around the stadium area and where the bars and restaurants are.”

This isn’t just carriers saying nice things, either. The speed results show up, both in crowdsourced data and the more controlled drive-testing firms do to study mobile networks. In 2016, Houston’s average mobile data speed, as measured by OpenSignal’s tens of thousands of crowd-sourced tests, was 9 Mbps. Just a year later, the average was 12.88 Mbps, a significant improvement over other metro areas, and enough to bump Houston into the top 10.

RootMetrics, which uses drive testing to produce a “RootScore” out of 100, shows a similar result for Minneapolis. Since early 2016 — when the networks started upgrading and preparing for this year’s Super Bowl — all four networks have significantly improved, compared to the national average, based not just on download speed but also coverage, reliability, and performance.

Ultimately, what all this means is that anyone living in a city that hosts the Super Bowl can be assured of a fantastic cell network — not just now, but for the future as well. All the network upgrades carriers are making across the city will be a huge deal when 5G rolls around, be that next year or in three years. 5G is going to rely on a dense network of small cells, and all four networks now have the necessary fiber run under the streets and city permits to make that happen. The LTE Advanced technologies that carriers have deployed to handle the Super Bowl crowds — 4×4 MIMO, 256QAM, carrier aggregation — are crucial stepping stones for a 5G rollout. Having the work done now means that your city should be lit up with 5G that little bit sooner, and without quite so many construction crews digging up the streets.