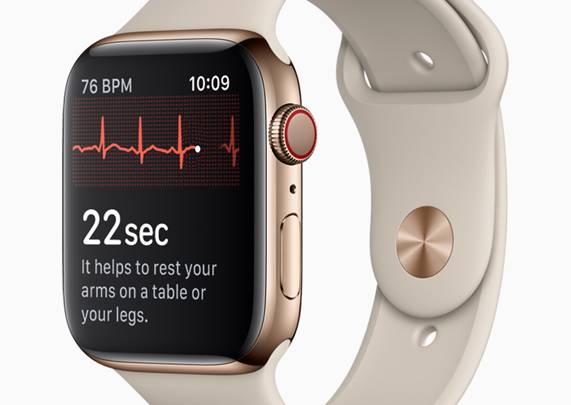 Apple trotted out cardiologist Ivor Benjamin, who’s also the president of the American Heart Association, during today’s product showcase at the Steve Jobs Theatre to tout what he described as the “game-changing” Apple Watch Series 4 the company announced today. His laudatory comment was focused specifically on what sounds like one of the watch’s coolest and potentially life-saving new features — the presence of a sensor that can perform an electrocardiogram right there from your wrist.

Along those lines, Apple said the upgraded feature-packed watch model sports a new accelerometer and gyroscope, which can be used to detect hard falls. An electrical heart rate sensor also takes the ECG using a new ECG app that Apple says has been granted a stamp of approval from the FDA.

Meanwhile, doctors like Ethan Weiss, associate professor in the Cardiovascular Research Institute at the University of California San Francisco, worry some otherwise healthy patients are going to be freaked out or possibly misinterpret data the watch gives them and rush to the ER or their doctor’s office. Sort of the way people tend to overreact when they start researching the web to understand minor symptoms they have and quickly get convinced it’s something serious.

Net net I bet there is going to be a massive increase in inbound flow from my patients as well as probably trips to the office and ER visits, but it will be interesting….

Apple COO Jeff Williams described the new watch — Series 4 of which will be available to order starting Sept. 14 — with some superhero-sounding language, calling it an “intelligent guardian for your health.” Among its other features, users will be able to touch the watch’s digital crown and after 30 seconds get a heart rhythm classification, which can tell if the heart is beating normally or if there are signs of Atrial Fibrillation. The latter being a heart condition that can lead to major health complications.

Apple says that all recordings, their associated classifications and any noted symptoms are stored in the mobile Health app in a PDF that can be shared with doctors. With watchOS 5, meanwhile, Apple Watch also intermittently analyzes heart rhythms in the background and sends a notification if an irregular heart rhythm is detected.

In an interview with CNBC, Patricia K. Nguyen, assistant professor of medicine in the cardiovascular division at Stanford, agreed with Ivor and used the same “game-changing” language, though she qualifies her praise. She told the business news network there are several things she still wants to know before she would be comfortable recommending it to patients.

She wants to know what data Apple gave to the FDA, something doctors often want to look at rather than taking an FDA clearance at face value. She also wants to see that the watch doesn’t deliver a ton of false positives, she wants to know how diverse the patient set was that Apple used for tests and whether the watch works well when people are moving instead of at rest.

Some reports have described the new watch as essentially bringing a portable heart doctor within reach of your wrist at all times. Skepticism notwithstanding, Apple should certainly get plenty of credit for what it’s trying here, since the new features also include things like an automatic 911 call that’s made if a fall is detected and the user doesn’t respond quickly.