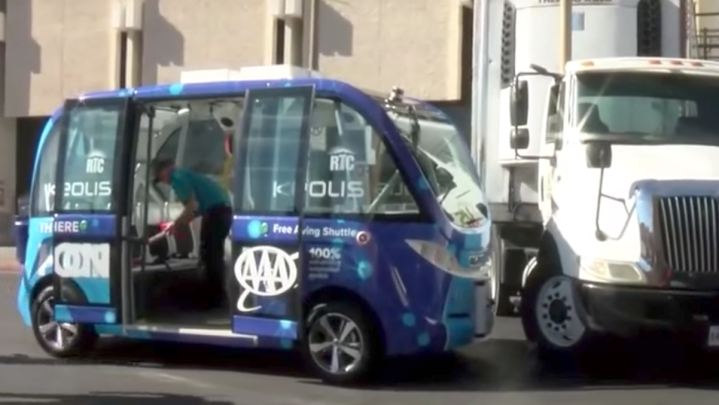 When news began circulating some 48 hours ago that a self-driving bus in Las Vegas got into an accident mere hours after its maiden voyage, it was clear from the start that the accident was incredibly minor. There was virtually no damage, aside from a dinged plastic panel, and the city of Las Vegas was careful to point out that the bus wasn’t actually at fault. However, it seems that even our most conservative assumptions about how the “crash” unfolded failed to adequately describe just how meaningless the entire incident was.

Like many other tech writers, Jeff Zurschmeide of Digital Trends reported on the accident, but his report carries a bit more weight thanks to the fact that he was actually aboard the bus when the accident occurred. As he puts it, it was essentially the most boring traffic incident in the history of mankind.

As Zurschmeide explains, the incident occurred like previous reports indicated, with a delivery truck not paying attention and swinging itself into the bus while the self-driving automobile remained completely stationary. The actual “crash” happened so slowly that he was able to take photos as it was happening, and everyone on the bus was watching it unfold in slow motion.

“The driver of the truck was probably watching where his trailer was going, and didn’t notice where we were,” Zurschmeide writes. “The so-called ‘crash’ happened in super slow motion, and merely dented the plastic panels on the front of the shuttle. It was no big deal, although the Keolis attendant was understandably upset.”

It’s clear that the shuttle had no idea what to do in that situation, which would probably also be true if a human had been piloting it. A beep of a horn might have prevented the actual contact, but by and large there was little that could have been done to prevent it. The only other option would have been if the shuttle was equipped with the ability to avoid oncoming objects by putting itself in reverse, but that doesn’t appear to be a feature, thought it very well could be at some point down the road.