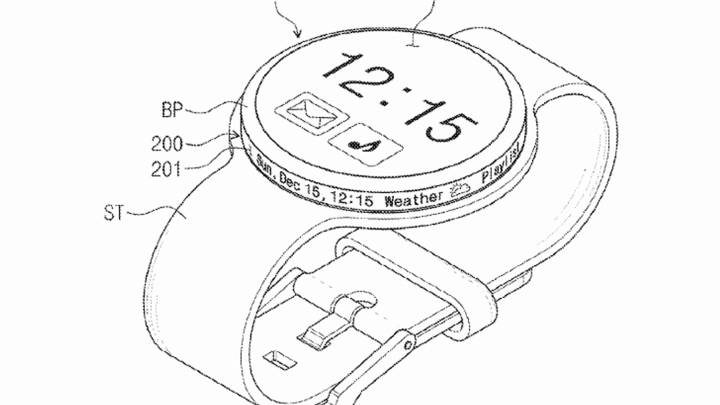 If you really stop and think about it, smartwatches are one of the wildest ideas for a mass market gadget. It’s a computer with a touchscreen that you wear on your wrist. It’s weird, not particularly practical, and the drawbacks are too many to list. But the Pebble, Apple Watch, and various Samsung Gear-whatevers that are piling up at your local Best Buy will look downright pedestrian next to one of Samsung’s grand visions for what smartwatches could be in the future, and it just showed its hand with a new patent. Prepare yourself for a smartwatch with a smart rim.

The patent, titled simply “Display Device And Smart Watch,” describes a wearable with not one, but two displays. The primary display is a round screen in the style that many Android Wear watches have adopted, and appears to be relatively unremarkable in its function. The second display is situated around the rim of the watch body, completely wrapping itself around the device like a long ribbon.

The idea is that the thin screen will relay certain information like weather, time, date, and possibly notifications, without requiring that the wearer activate the main screen. The mythical watch would also use Samsung’s flexible display technology, which it’s been showing off for quite some time.

It’s a pretty hilarious concept, considering smartwatches exist in order to take some of the burden off of checking our smartphone screens every time we get a notification, and now the smartwatch is getting a second screen to take the burden off of the first one. As with all patents it’s entirely possible this concept will never actually see the light of day, but it’s an interesting idea nonetheless.