Samsung has officially discontinued the Galaxy Note 7, its most innovative and feature-packed smartphone ever. The company stopped production and issued a global recall following dozens of reports that “safe” replacement handsets were still exploding in the hands of users. We cannot urge strongly enough how important it is that all users return or exchange their Note 7 handsets immediately. But despite knowing the risks involved with continuing to use a Galaxy Note 7, many diehard fans love the phone so much that they’re unwilling to part with it despite the dangers they face.

Well, we have some good news for Galaxy Note 7 fans this morning: You don’t have to put yourself and those around you in danger in order to enjoy some of the Note 7’s exciting new features, because they’re headed to other Samsung phones.

No, your Galaxy S7 and Galaxy S7 edge will never support some of the Galaxy Note 7’s hottest new features. The phone included a suite of functionality that was built specifically for its S Pen stylus, and those features will be sorely missed until next year when Samsung launches a new Note series smartphone. It might not end up being called a Galaxy Note since that brand may have been irreparably damaged by the Note 7 debacle, but this is hardly the end of Samsung’s stylus-equipped smartphones.

The Galaxy Note 7 also included some nifty new features that didn’t need a stylus to be used, and it looks like the company will bring at least some of them to other Samsung smartphones. In fact, Samsung has already started adding Note 7 features to the Galaxy S7 and Galaxy S7 edge. A post on the xda-developers forum discovered by Engadget shows that there’s a new update being pushed out to Galaxy S7 devices that packs some of the Note 7’s cool always-on display features. The S7 and S7 edge both feature class-leading Super AMOLED displays similar to the one on the Note 7, so they can take advantage of these enhancements without any material impact on battery life.

It’s unclear which other Note 7 features might end up making their way to the Galaxy S7 and other phones, if any. But for now, these new always-on display enhancements at least give Note 7 fans a taste of what they’re missing. Check out the post on xda to see more details on the changes in this new update. 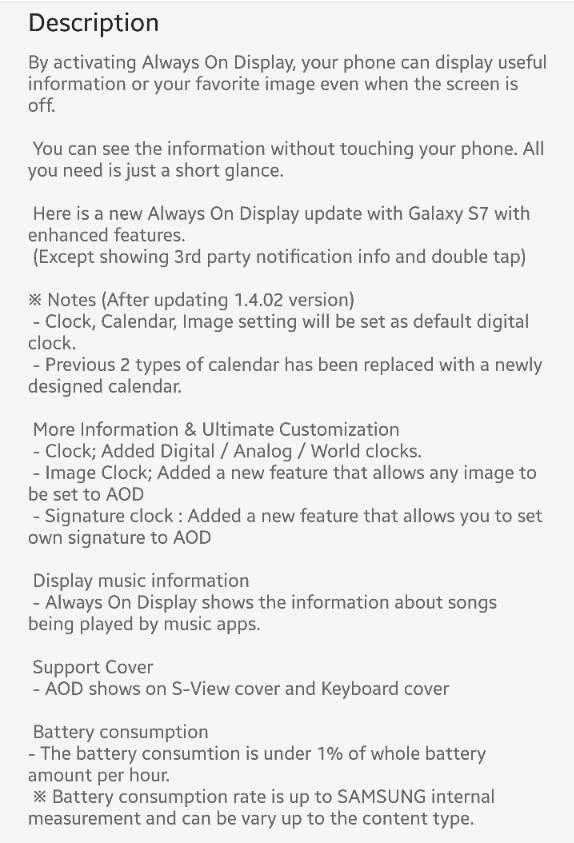