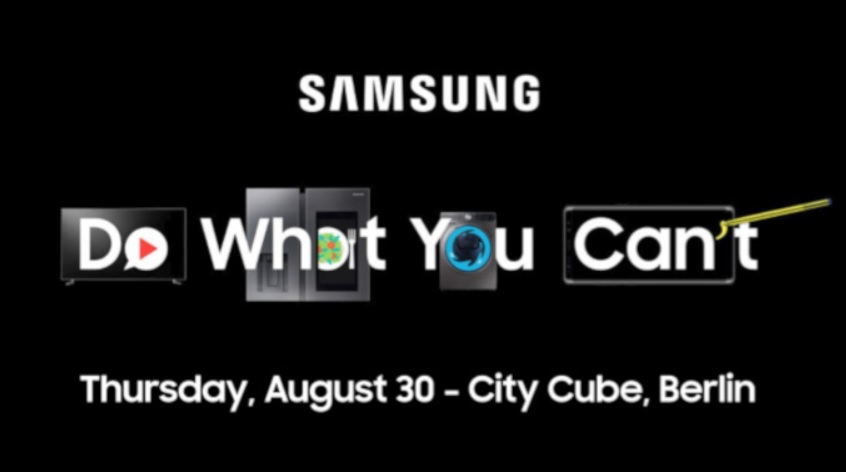 We’re just days out from the official unveiling of the Galaxy Note 9 at Samsung’s Unpacked event in New York City, but that’s not all that the South Korean company has in store for August. Over the weekend, Samsung began sending out invitations to its IFA 2018 press conference, which will take place on August 30th ahead of the annual Berlin trade show. IFA will then begin in earnest on August 31st and run through September 5th.

It’s worth noting that Samsung typically uses its stage time at IFA to focus on home appliances and Internet of Things devices, such as washing machines, refrigerators, and televisions (all of which are pictured in the invite). The invite also appears to show off the Galaxy Note 9, which hasn’t actually been announced yet.

The Galaxy Note 9 will have already shipped by the time IFA 2018 rolls around, but the phone will likely make at least a short appearance just to remind everyone that it’s now available. There’s also a chance that the Galaxy Watch will be saved for this event, rather than packed in to the Note 9 unveiling on August 9th. Previous rumors have pointed to the watch and the phone being announced at the same time, but the Galaxy Watch might be a more appropriate fit for the IFA event. Plus, it wouldn’t distract from the Note 9 that way.

While the Note 9 has been thoroughly spoiled by leaks, the timing of the Galaxy Watch unveiling is still unclear, but it’s worth noting that the Gear Sport smartwatch was first shown off at IFA 2017. That’s not to say that Samsung will follow the same pattern, but it wouldn’t be out of character to wait until late August.