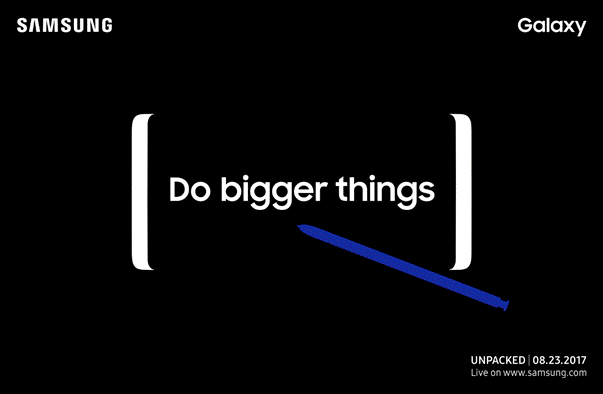 Samsung just made the worst-kept secret in technology official. It has send out invitations to an Unpacked event in New York City on August 23rd. The invite doesn’t technically say that it’s for the Note 8, but the giant stylus on the invite couldn’t be any more obvious if it was writing WINK WINK.

From what we know so far, the Note 8 will take most of the revolutionary features from the Galaxy S8 and make them bigger. That should mean the same rounded corners, the same lack of bezel around the edges, and yes, the same fingerprint sensor located on the back.

The initial reveal at the end of August confirmed with we already knew, that the Note 8 is going on sale in September. There’s generally a few weeks between the reveal of a phone at the device going on general sale, so the timing makes sense with what we know so far.

BGR exclusively revealed a new set of Note 8 renders earlier today, which show the design we’re expecting to see at this point. Inside, we’re likely to see specs like a 6.3-inch Super AMOLED display with a 18.5:9 aspect ratio, 6GB of RAM, an Exynos 8895 or Qualcomm Snapdragon 835 chipset depending on region, dual 12-megapixel rear cameras, a 3,300 mAh battery, and an updated S Pen stylus.