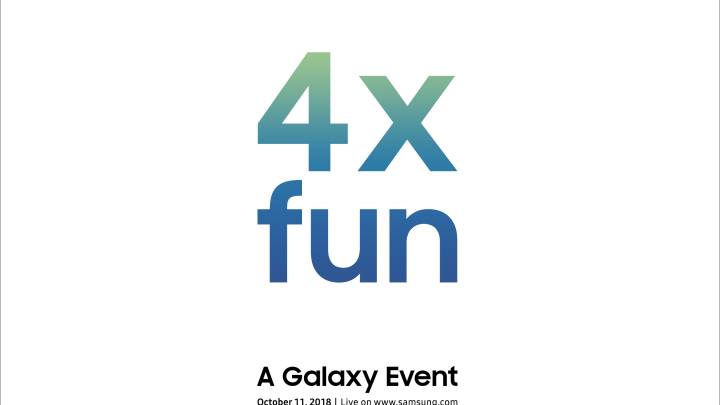 Just two months out from the launch of the Galaxy Note 9, Samsung is already teasing another device unveiling. This week, the company announced a ‘4x fun’ event on its website which it specifically refers to as ‘A Galaxy Event,’ which suggests that either a new phone or a new tablet will make its debut.

Streaming live on Samsung’s website on Thursday, October 11th, the event will focus on Samsung’s newest Galaxy device, which it claims will bring “more ways to express yourself than ever before.” It’s unclear how it will accomplish this, but there have been rumors floating around the internet recently that Samsung will introduce a device with four cameras — all on the back of the device. That would explain the name of the event.

There are a wide variety of exciting options for the subject of this event, but considering how soon it’s coming after the release of the Galaxy Note 9 and the fact that it seems to be online only, it’s hard to imagine Samsung having another flagship product up its sleeve. There’s always a chance that this will be the moment that Samsung officially uncovers its foldable phone, but recent reports seem to point to a 2019 launch for the rumored Galaxy F.

Flagship or not, we’ll know more about the mysterious device when the live streamed event begins on October 11th. The invite did not include a specific time aside from the 11th, but we’ll be sure to provide all the latest updates as soon as Samsung shares more details about the timing and content of the ‘4x fun’ event.