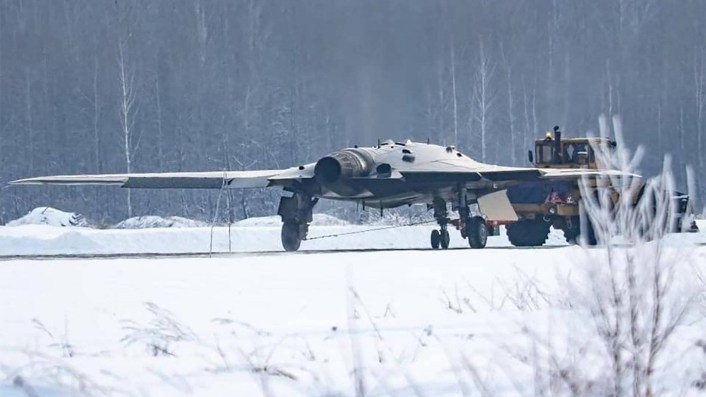 Well, it seems Russian military officials don’t want to just stop with that fearsome new hypersonic intercontinental ballistic missile that was tested last month, which we told you about and which Russia claims there’s no defense against. It would appear the country’s military forces have also been testing the feasibility of having AI-powered wingmen fly alongside Russian fighter pilots, executing commands issued by the human pilot an inaugurating a scary new chapter in aerial military combat.

News accounts of Russia’s efforts here are the result of images spotted on social media of a drone called Hunter, an unmanned combat vehicle, along with images of a jet called the Sukhoi Su-57. Of particular interest is that fighter jet’s tail. As you can see below, on the tail you can see the shape of a jet as well as an image that seems to be the “Hunter” drone, along with the image of a lighting bolt.

The Aviationist news site notes that lightning bolt suggests a wireless connection between both planes.

The Russian military doesn’t seem to be trying to hard to hard the relationship. Because also, according to The Aviationist, “new pixelated camouflage on the underside of the aircraft mimics the plan view shape of the Hunter remotely piloted aircraft.”

Per The Aviationist: “Speculation has surfaced that the Su-57 may be developing some capability to control or share data with this new remotely piloted aircraft. This concept may be similar to an idea proposed by the U.S. Air Force with the F-35A Lightning II.

Word of the AI-powered crafts come on the heels of last month’s test of Russia’s Avangard missle system, which combines a powerful ballistic missile with what’s known as a “hypersonic glider.” Russia claims the system is capable of speeds exceeding five times the speed of sound, and that the missile can successfully evade modern missile defense systems.