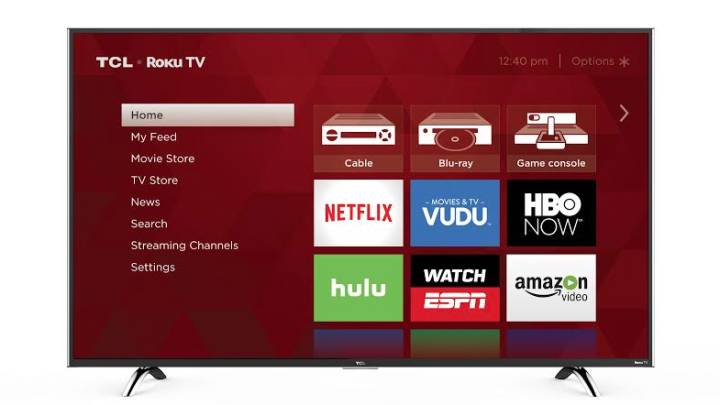 Apple, Google and Amazon all have TV products that smarten up any TV, transforming it into a portal to numerous digital content sources. Roku is no stranger to attacking the living room in such a manner, but the company also has a different kind of product in mind for customers, smart television sets that come preloaded with Roku programming.

At CES 2016, Roku is launching new smart TV models, which isn’t surprising considering that it did the same thing in previous years. However, this time  Roku is betting big on 4K UHD TVs that should offer users an even better overall viewing experience.

Roku said in a press release that it currently has 8% of the smart TV market share in the U.S., with more than one million Roku TVs being already in use in America. The streaming company is now launching the first 4K UHD Roku TV models in partnership with TCL, introducing a Roku TV HDR reference design for TV partners. Down the line, Roku is expected to introduce nearly 60 Roku TV models, with the TCL models expected to hit stores this spring.

In addition to TCL, Roku is working with Haier, Hisense, Insignia and Sharp, with models ranging in size from 28-inch to 55-inch. Pricing details for any of these Roku 4K UHD TVs aren’t available at this time.

LAS VEGAS–(BUSINESS WIRE)–At CES 2014 Roku Inc. unveiled Roku TV™, a smart TV platform licensed to TV OEMs, with the goal of providing its TV partners with a cost-effective solution to build the best smart TVs in the industry using the Roku® OS. Roku TVs combine the simple, personalized home screen, 3,000+ streaming channels and powerful search and discovery features of the Roku OS with sleek hardware designs and affordable prices, making them some of the most-awarded, highly sought after smart TVs available today. Now, with approximately 8% smart TV market share* in the U.S., and one million Roku TVs in the homes of consumers at the end of 2015 alone; Roku enters 2016 with plans for the first 4K UHD Roku TV models, the introduction of the Roku TV HDR reference design, and its TV OEM partners expect to introduce nearly 60 Roku TV models.

“We’re very pleased with the success of Roku TV since the launch of our licensing program in 2014. Consumer response and engagement has been tremendous, and our TV partners have secured great retail placement and stellar product reviews that have led to strong sales results,” said Chas Smith, general manager of OEM for Roku. “We expect momentum for Roku TV to accelerate as we continue efforts to add new TV partners while expanding our work with existing partners to bring many more Roku TV models to the U.S., Canada and soon Mexico.”

Delivering the Next Era of Roku TV

Beginning this spring, consumers are expected to be able to purchase the first 4K UHD Roku TVs that combine the full Roku TV experience with the beautiful picture and detail of 4K UHD resolution. Much like the recently launched Roku 4 streaming player, 4K UHD Roku TV models will help consumers easily find entertainment with access to what is expected to be one of the largest lineups of 4K UHD streaming channels available on a smart TV, and unique features such as Roku’s 4K Spotlight Channel. TCL®, the fastest growing TV brand in America, is the first Roku TV partner to announce a 4K UHD Roku TV, with multiple models expected to hit store shelves this spring. 4K UHD TVs from additional Roku TV partners are expected to be available this year.

“The introduction of 4K UHD TCL Roku TV models is a significant step in our partnership with Roku,” said Chris Larson, vice president of sales and marketing, TCL. “We’re confident we’ll deliver one of the richest experiences available on a 4K smart TV, and that consumers will love the complete 4K entertainment package these TVs deliver. TCL is also thrilled to be one of the first partners using the new Roku TV HDR reference design to enhance the great picture quality of TCL Roku TVs.”

In 2015, nearly 40 Roku TV models were available from five TV partners including Haier, Hisense, Insignia, Sharp and TCL with models ranging in size from 28” to 65”. Entering 2016, Roku TV is well positioned for growth as the company’s TV OEM partners are expected to introduce nearly 60 Roku TV models. Availability is also expanding into more countries with TCL Roku TVs expected to hit store shelves in Mexico in the first half of the year. This international expansion follows the successful spring 2015 launch of Roku TV in Canada with models available from both the Insignia and Sharp brands.

Roku TV is one of three ways Roku distributes its powerful operating system (Roku OS) purpose-built for the TV screen. The Roku OS also powers Roku streaming players such as the new Roku 4, as well as streaming players offered by pay TV operators around the world as part of the Roku Powered™ program.

Roku TV models, including the new 4K UHD TCL Roku TV, will be on display at the Pepcom Digital Experience! event from 7:00 to 10:30 pm on Tuesday, Jan. 5, 2016 at the Mirage Hotel. CES attendees can also see Roku TV models on the show floor in the Haier, Hisense and TCL booths.

Roku is the creator of a popular streaming platform for delivering entertainment to the TV. Roku streaming players and the Roku Streaming Stick® are made by Roku and sold through major retailers in the U.S., Canada, the U.K., the Republic of Ireland, France and Mexico. Roku licenses a TV reference design and its operating system to TV OEMs to create co-branded Roku TV models. Under the Roku Powered™ program, Roku licenses its streaming platform to pay TV operators around the world who want to use the Internet to deliver entertainment services through streaming players. Roku was founded by Anthony Wood, inventor of the DVR. Roku is privately held and headquartered in Saratoga, Calif., U.S.

Roku and Streaming Stick are registered trademarks and Roku TV and Roku Powered are trademarks of Roku, Inc. in the U.S. and in other countries.

TCL is a registered trademark of TCL Corporation.