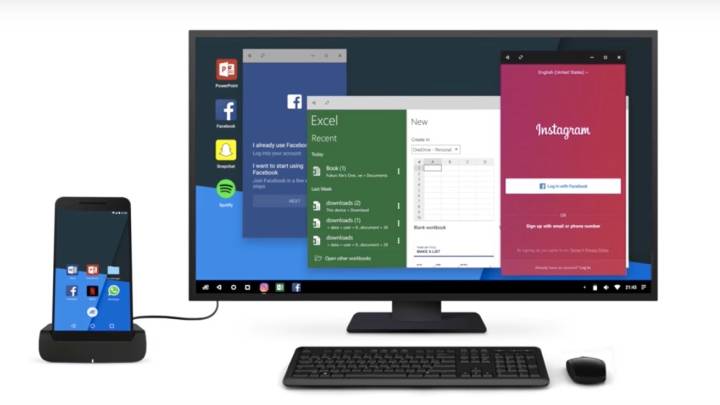 Android is an operating system that’s supposed to power smartphones, tablets, cars, wearables, and other gadgets. But it’s not an OS meant to take over your primary PC. Or is it? Recent reports indicate that Google has some great plans for Android, including turning the OS into a platform that can run on any device, laptops and desktops included. Even Samsung is heading in that direction on its own, as the Galaxy S8 is rumored to come with a special accessory that can be used to connect the smartphone to an external display.

But until any of these plans get official, there’s an Android company based in China that’s already doing novel things with Google’s mobile OS. Jide Technologies, which makes its Android-based, Windows-like Remix OS, is ready for the next big thing: Turning Android smartphones into full-fledged computers.

We talked about Remix OS in the past, a free OS that lets you install Android on any Windows or Mac to offer you a Windows-like user interface and overall experience. The best part is that you still get to use the same apps you downloaded from Google Play on a bigger screen, complete with modified UI elements for the larger display real estate.

But Jide is ready to move forward with an even bolder plan. Rather than installing Remix on your desktop, you could install Remix OS on Mobile (ROM) on your smartphone, and then just connect it to a display or TV. That’s Remix Singularity in action:

That certainly sounds great, at least on paper. ROM will be “as close to stock Android as possible,” Jide co-founder David Ko told The Verge in an interview. “But imagine when you get back to your office or study, you connect your phone, and it turns into a PC mode, just like a laptop or desktop.”

Yes, that sounds amazing in theory. In practice. ROM will not ship with Google Play preloaded, so users will have to sideload the app to get their Play apps working on bigger screen. Furthermore, Jide needs partners to agree to have ROM installed on their devices, something that might not coincide with their contractual obligations to Google.

Finally, there’s the hardware factor. You’d probably need a rather powerful mobile device to drive a great ROM experience on a monitor. But Jide is primarily targeting first-time Android users who won’t all have the means to afford a powerful enough device.

That said, Remix Singularity definitely sounds exciting, so we’ll just have to wait to see it in action.