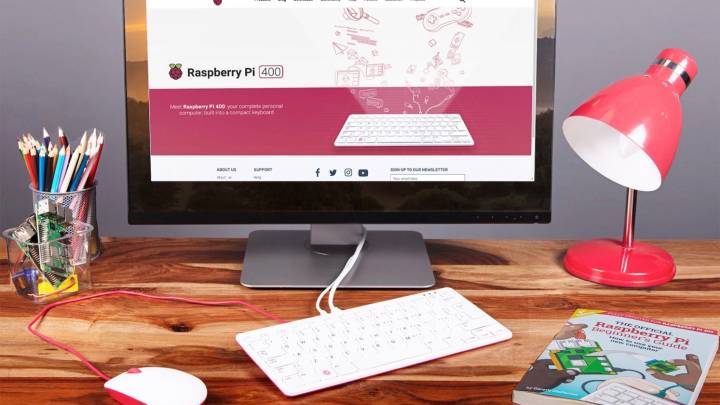 The Raspberry Foundation has been making affordable personal computers for years. The Raspberry Pi devices started at just $35, offering tinkerers a cheap PC that could be used for various DIY projects. But the Pi computers evolved tremendously in the past few years, becoming even more user friendly in the process. The Raspberry Pi 4 isn’t just a lot more powerful than the former generations; it also comes in ready to use packages that anyone can turn into fully working PCs ready to support basic productivity apps, internet browsing, and media playback. Add to that the whole 2020 coronavirus pandemic factor, and the Raspberry Pi might be exactly the kind of additional computer for the home in a year where more people have to work or study from home. To that end, the foundation just launched an even better Raspberry Pi PC package, one that continues to be incredibly cheap/ The Raspberry Pi 400 above looks like an unassuming keyboard, but it actually contains the same last-gen Raspberry Pi 4 PC that’s also available from the organization.

The Raspberry Pi 400 costs just $70, and that’s if you don’t want all the bells and whistles. But the $100 option is an even better option, as the bundle packs everything you need to get your Raspberry Pi computer going as soon as you open the box. Aside from the PC-in-keyboard computer, you also get a mouse, a USB-C power supply, an SD card that runs the Raspberry Pi OS, and a micro HDMI to HDMI cable that you’ll need to hook up the PC to a monitor or TV. The latest edition of the Raspberry Pi Beginner’s Guide is also included in the $100 package.

Otherwise, the Raspberry Pi 400 can be used as an additional PC for your home and support work, school, and entertainment tasks. And yes, it’ll stream Netflix shows as well if you need to turn a monitor into a streaming-ready entertainment center. The only downside is that you’ll have to get acquainted with an operating system you might not be familiar with. That’s Linus, or Raspberry Pi OS, which was updated just earlier this year.

The new Pi 400 is already available to order in several markets, with more coming soon. The first ones are the UK, US, and France, with Italy, Germany, and Spain to get access to Raspberry Pi 400 units next week. Australia, India, and New Zealand kits will be available by the end of the year, and other markets will follow soon. When ordering, you’ll be able to choose between various keyboard configurations, assuming that your local retailers have those units in stock. Raspberry Pi doesn’t sell the kits directly through the website.

A brief video teasing what Raspberry Pi 400 can be used for, explaining why it’s good for during the health crisis, follows below.