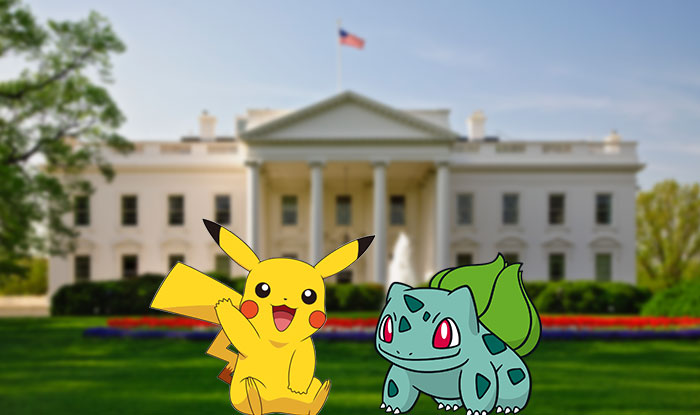 The White House might be one of the most prized gyms in the US when it comes to Pokemon Go action, and a player completely mocked it to send a message. After winning a battle there, he put in a Magikarp to defend the gym… which is a hilarious inside joke for Pokemon fans. Also, he named it The Donald, probably just for laughs.

As Kotaku explains, it’s sort of a trend to defeat a gym and then place a Magikarp there to defend it, which is just about the weakest creature in the game.

The Donald, seen below, only stayed atop the gym for a few minutes, but other people try to keep it in place by elevating the level of the gym. “The fish was actually somehow supported briefly by his party,” Joshua Shull said.

However, this message doesn’t have anything to do with politics, although naming a Magikarp after Donald Trump is indeed hilarious.

“Just standing there for fifteen minutes I think I saw [the White House] change teams at least 10-15 times,” Shull added. “There’s always a huge crowd of tourists in front of the place normally; now just half of them are fighting for the gym.”

The message Shull tried to send has something to do with the way the game is played.

“Whenever someone takes down a gym, they’re answering the question of ‘what’s the point,’” Shull said. “To some, it’s just to have their little creature up on the pedestal, five minutes of fame. To me, since gyms are almost impossible to hold and barely give you any kind of exp, I wanted something more than that.”

He continued, “Sure I can take down and put my strongest 2000 CP Pokemon in the White House, so what, that’s already been done—and the Pokemon would be knocked off the gym in seconds anyways. I wanted to do something unique, something memorable, something that would maybe both communicate something valuable while being humorous. Thus, The Donald.”

The problem with gym battles is that they’re flawed, Shull said, so it’s difficult to take them seriously when the system favors the attacker.