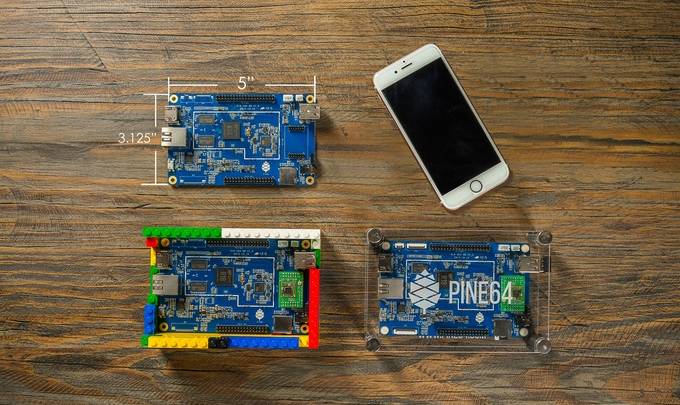 As recently as a few short years ago, the notion of a fully functional “supercomputer” the size of a smartphone would have been thought ridiculous. And even if such a device did exist, it would have undoubtedly been priced well out of the reach of most users. Fast-forward to 2015 and we’ve seen incredible progress made in the single-board computer space. There is a full-fledged Windows 10 PC called the Kangaroo that’s the size of a phablet and costs just $99, and of course the Raspberry Pi was introduced at a shockingly low price point. Now, the company behind the Raspberry Pi pushed boundaries even further with the $5 Raspberry Pi Zero.

But Raspberry Pi products aren’t as much about power as they are about breaking down barriers for entrepreneurs and engineers. This left an opening in the market for a new type of ultra-low cost computer that takes the spirit of the Raspberry Pi and injects it with a shot of adrenaline.

Beginning today, a new single-board computer called Pine A64 will look to answer the call.

MUST SEE: Remarkable new sensor chip pulls power out of the air so it never needs to be charged

The new Pine A64 is a tiny little computer with great big ambitions. The expandable single-board device runs either Linux or Android and features impressive specs that outshine comparable products by a substantial margin. Highlights include a 1.2GHz quad-core ARM processor, a Mali 400 MP2 GPU, 512MB of DDR3 RAM, a microSDXC slot and support for 4K ultra high-definition video.

An upgraded Pine A64+ version bumps the device up to 1GB of DDR3 RAM and adds a 5-megapixel camera port, a MIPI video port and a touch panel port.

“PINE64 set out to create a simple, smart and affordable computer that gives people access toward making their next big idea come to life,” PINE64 co-founder Johnson Jeng said. “We provide a powerful 64 Bit Quad Core single-board computer at an exceptional price and remain compatible with multiple open source software platforms to build a community of creativity and innovation.”

Now, for the bad news — though it’s not as bad as similar announcements have been.

The Pine A64 and Pine A64+ are part of a Kickstarter crowdfunding campaign, so you can’t actually purchase one right now. The good news, however, is that the campaign has a low finding goal of $31,416 that will undoubtedly be reached quickly. Better yet, both Pine models are ready for primetime and they will begin shipping to backers in about two months. Not in six months and not in a year, but in February.

Pine A64 costs just $15 while the upgraded Pine A64+ model costs $19. More information can be found on the company’s Kickstarter page, and a video featuring Apple employee No. 12 Daniel Kottke is embedded below along with a spec grid that compares the Pine A64 and A64+ to the Raspberry Pi-2B and Pi-1A+.