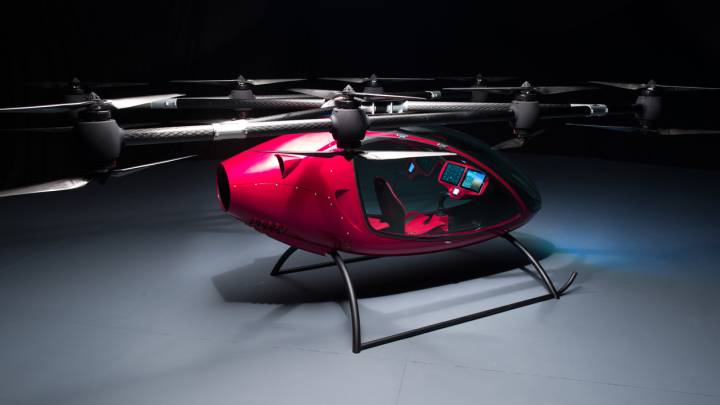 We’ve seen a seemingly endless number of manned drone concepts already, from “flying taxis” in Dubai to the half-car, half-drone system Airbus dreamt up earlier this year. They’re all great, but the vast majority of them are merely ideas, or if they do physically exist, they haven’t reached the point where anyone would dream of climbing aboard. This week, a company called Passenger Drone came out of seemingly nowhere and unveiled its own two-person passenger aircraft that not only already exists, but even has successful manned flights under its belt.

The vehicle, which is called simply PassengerDrone — yes, that’s the company name but without the space, so just stick with me here and we’ll get through this — is powered by 16 individual motors paired with propellers, which the company says offers both stability and redundancy. But the most interesting thing about it is that, well, it doesn’t actually look half bad.

Its dual seats are situated like those in a helicopter, with the rear seat positioned behind and elevated slight above that of the pilot. I say “pilot” because while the craft is capable of flying autonomously (making it a drone) it also offers a manual flight mode, complete with joystick-like flight controls.

Passenger Drone says it’s been developing the PassengerDrone (this is getting confusing) for roughly three years, deciding not to seek out media attention until their vehicle was actually ready for the spotlight. Now that the company has successfully completed manned flight tests, apparently now is that time.

It’s definitely an interesting addition to the lightly populated manned drone space, and seems to be closer to the “flying car” future than most of its competitors, but there’s still some pretty big questions that need to be answered.

For starters, the company mentions how the drone could alleviate traffic congestion and provide a zero-emission alternative to traditional vehicles, but actually flying anything like this in a US or European city is still a no-go thanks to red tape and safety regulations. Additionally, there’s been no mention of how much it would actually cost to put this thing in your driveway (or landing pad, I guess?), but it most certainly won’t be cheap. Of course, laws won’t shift without lots of momentum, so perhaps the PassengerDrone can help swing lawmakers towards an autonomous flying future.