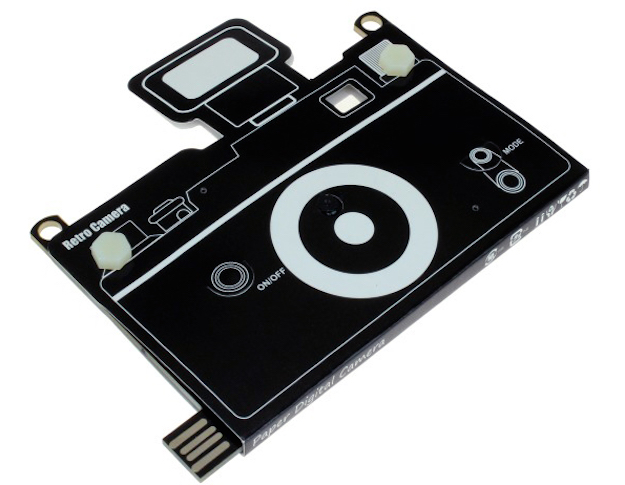 You won’t find this at CES, but if you’re at all interested in zany and novel tech gadgets, you’ll definitely find a lot to get excited about with the Paper like a digital camera, a new super-thin 6mm camera that costs just $28 and packs a whole lot of bang for your buck.

Yes, the product has a funky name, but seeing as how the distinctively retro looking device is a video-capable digital camera crammed into a 6mm thick form factor, we’re more than happy to overlook its clunky title. And oh yes, did we mention that it can also take voice recordings?

What makes this super thin camera so remarkable is that it manages to fit so many features into such a thin footprint. Not only can it take photos and video, but the camera itself comes with an on/off switch to access different modes, a microSD card slot (with up to 16GB of storage), an LED light to signal which mode is ‘active’, and a convenient USB 2 terminal for transferring photos to your PC with ease. Notably, the USB terminal can also be used for charging purposes.

The camera’s LED light can be seen below.

As for the camera’s photo and video quality, we’re obviously not talking about a device a professional would ever opt for. Still, for a camera that weighs in at just 43 grams, the photos and videos aren’t too shabby all things considered.

The device comes with a built-in battery and even a strap so that you can wear it around your neck.

Some sample video footage and photos can be seen below. Again, it’s nothing special, but remember, it’s just 6mm thin!

And a still photo to wrap things up.

The product is available for purchase via this Japanese website, but as far as we can tell, the product currently seems to be sold out.