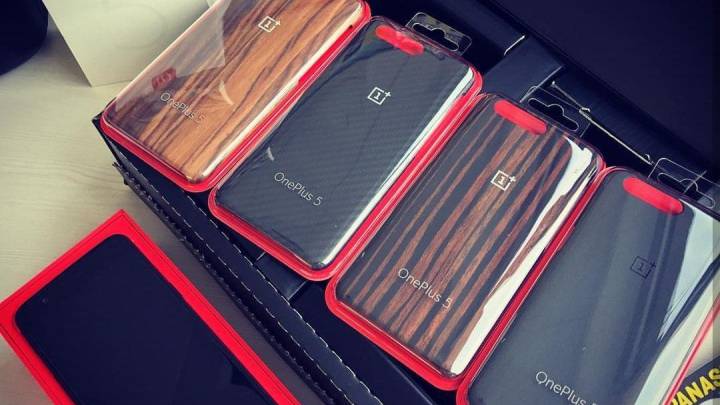 The OnePlus 5 is officially being unveiled tomorrow, which means that eager leakers only have a day left to get their top-secret pics out into the wild.

Several people with access to the final product appear to have jumped the gun and posted images of the final product, including shots of the device, the box, and case after case. Basically, there’s nothing left for OnePlus to surprise us with.

The first image was posted to SlashLeaks earlier this morning, and shows a couple of official cases next to the box of the phone. We’ve seen so many pictures of the front of the device that there’s no surprise here, and the box looks exactly like the kind of packaging that we’ve come to expect from OnePlus.

The second picture shows the back of the phone out of the box, and again lines up with all the other extensive leaks (and official images) that we’ve seen so far. There’s the same dual camera setup, the same black plastic back, and the button and logo layout that we’re expecting to be officially unveiled this week.

In all likelihood, these leaks are coming from industry people that have a pre-release device for testing or review. It’s common practice for select individuals and organizations to get a device early, but under a non-disclosure agreement that prevents leaks like this. However, give enough people access, and the inevitable happens.

At this stage, the only thing really left to leak is the official pricing and release strategy. Historically, OnePlus has tried to supply a flagship-quality phone at a slightly lower price than iPhones and the Samsung Galaxy devices.

This year, it seems like DJI might be aiming for a higher price and higher-quality device. It looks like the OnePlus 5 will have particularly top-end specs, like a Snapdragon 835 processor, more than 4GB of RAM, dual-camera setup and a good screen.

It’s not impossible that the price will come in somewhere around $450, which would be a hefty discount on the $750 the Galaxy S8 runs, or even the $1,000 that Apple could charge for the iPhone 8. At this point, we’re nearly done speculating, and it’s just a waiting game for the next 20 hours.