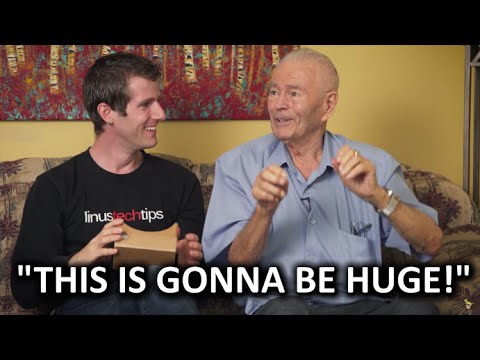 We all know how frustrating it can be to try and teach your grandparents about technology. But there’s also a definite sense of wonder to be had when the older generations first understand all that smartphones have to offer.

There’s also no better way for a grandparent to learn than for famous YouTube nerd Linus Sebastian to bring over a box of Google toys.

There’s not much complicated to this video: Linus goes over with a box of Google-provided technology, and tries to show it off. He starts with a Nexus 6P and a Chromecast, to demonstrate how easily you can rent movies these days without having to get off the couch.

Some of the more amazing stuff is things that I totally take for granted. Street View and a Google Cardboard is a cool five-minute distraction if you’re used to Street View and the concept of VR, but if you’ve never seen either, it’s a magical teleportation device to go travelling.

Even video calling — which I assumed all grandparents now use excessively — is a new concept to Linus’s grandpa. It’s pretty magical to see how he reacts to seeing his great-grandson at the other end of the line — even though video calling seems completely normal to the small kids.

It’s worth mentioning that the video is sponsored by Google, so if there were any bloopers, they’ve probably been edited out. I don’t think it’s fake, though — I imagine 91-year-olds don’t even know what sponsored content is, let alone know how to act for an ad.