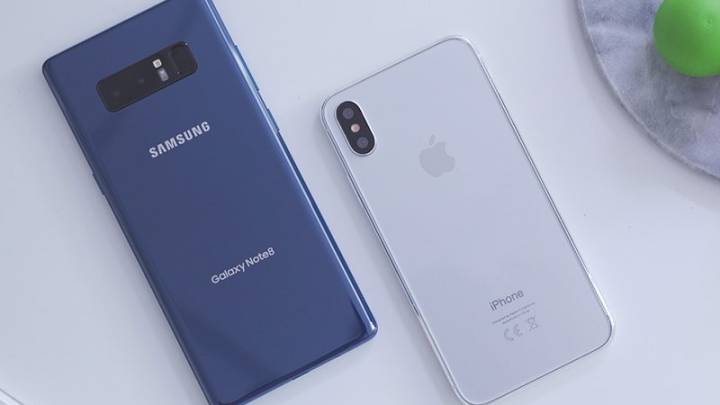 The Galaxy Note 8‘s official release date is September 15th. Normally, pre-ordered phones will ship a day or two before the release so that the UPS man shows up on your doorstep the day of the release.

But with the Galaxy Note 8, it looks like Samsung isn’t beating around the bush. Pre-ordered devices already appear to have shipped from Verizon and Sprint, with some deliveries as soon as today.

Customers from Sprint and Verizon have provided emails to BGR showing that their orders have already shipped. Both orders are set to arrive on Tuesday, September 5th, a full 10 days before the official release date. Users on the Android Central forums and XDA developer forums have also been told a ship date of September 4th, according to logs of chats with customer support posted by users.

This appears to be an acceleration in the shipping process. Just two days ago, we were hearing that the device would ship on September 13th.

Now, a UPS shipping label and estimated delivery date isn’t a firm guarantee of anything. It’s possible for shipments to be held in delivery centers for a few days before final delivery — the early shipping from warehouses is sometimes just a logistics move to make sure that all the devices get delivered on release day.

But the fact that customers are being told a ship date of September 4th by customer service, as well as multiple emails from different carriers showing that devices have already shipped, indicates that this is a deliberate move to send devices out early.

It could be a tactical decision by Samsung and the carriers to try and get a jump on the competition. September 15th, the official release date, is just days after Apple is holding an event where it’s certain to reveal some new iPhones. Pre-orders are just pre-orders: they can be cancelled easily before the ship date — say, if a customer saw the new iPhone and decided they want that instead. There’s no guarantee, but I’m guessing that people are far less likely to return a device they’ve already received and set up than they are to just cancel a pre-order.

The LG V30 could also be a worry. The newly-released device is a strong contender, especially for anyone who wants a more intelligently-placed fingerprint sensor, or a slightly smaller device. It also supports T-Mobile’s 600MHz network, which should be a big factor for T-Mobile customers.

There’s also no real reason not to send the devices out now. Assuming that Samsung already has significant stock on hand, sending out pre-orders early will reward customers who put cash down straight away, and it’s a good gesture of good faith from Samsung. Surveys showed that after last year’s Note 7 debacle, customers still retained surprising loyalty towards Samsung. Shipping pre-orders a full week early is a good way of rewarding that!

We’ve reached out to Sprint, Verizon, and T-Mobile asking for clarification on shipping dates, and will update when they reply.