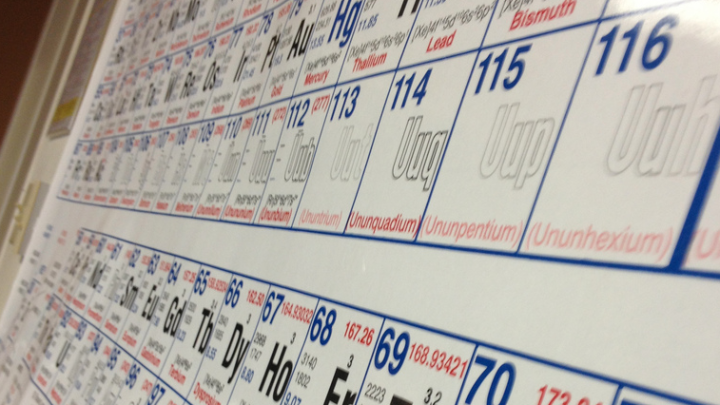 The periodic table just got some new members, as the International Union of Pure and Applied Chemistry has officially accepted new names for four elements. Element numbers 113, 115, 117 and 118 will no longer be known by their placeholder names, and instead have all-new monikers decided upon by their discoverers.

The discoveries were first recognized about a year ago, and the proposed names for them were decided upon this past June. Now, chemistry’s highest group has decided they are valid and will move forward with the all-new labels.

The official names will take the spot of placeholder titles that were given to the elemental numbers prior to their formal discovery. Those names — ununtrium, ununpentium, ununseptium and ununoctium — occupied the seventh row of the periodic table, and will now be discarded.

“The names of the new elements reflect the realities of our present time,” IUPAC President Prof Natalia Tarasova says via press release. “Universality of science, honoring places from three continents, where the elements have been discovered — Japan, Russia, the United States — and the pivotal role of human capital in the development of science, honoring an outstanding scientist — Professor Yuri Oganessian”.

With row seven now completed, chemists look to the road ahead, and hope to discover entirely new elements, keeping science on its toes and periodic table poster printers in business.