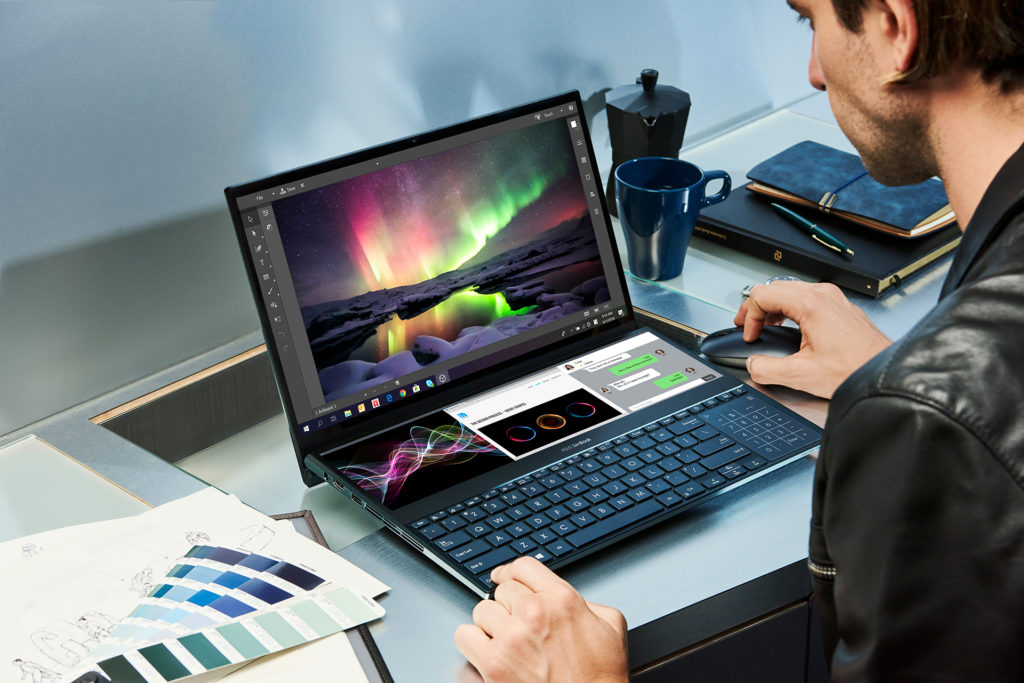 In celebration of its 30th anniversary, Asus today at its Computex 2019 trade show unveiled a range of limited-edition devices that includes a wild new laptop design boasting a pair of 4K screens.

The company showed off a range of products today including a new version of the ZenFone 6 Edition 30 smartphone, a portable monitor and a few laptops. Regarding the latter, though, it’s the ZenBook Pro Duo that’s attracted an outsized share of attention and headlines today, mostly over its two 4K screens.

Along with the main 15-inch OLED laptop display, there’s also a secondary “ScreenPad Plus” screen that sits right above the keyboard that seems to be half as tall and just as wide as the keyboard. A writer for The Verge marveled at what Asus attempted here, commenting that “It’s as if Asus looked at the MacBook Pro Touch Bar and thought ‘What if that, but with 32 times as many pixels?'”

Along with this announcement, Asus also showed off a smaller ZenBook model, the 14-inch ZenBook Duo that presents that same overall design concept as the Pro version except for these two screens being full HD instead of 4K, among a few other differences. The company said both laptops are intended for mobile creatives and professionals, though no pricing or availability for either model has been disclosed as yet.

According to an Asus press release, the main screen is a 15.6-inch 4K UHD (3840×2160) OLED HDR display, accompanied by a 14-inch 4K (3840×1100) ScreenPad Plus. It’s powered by an eight-core 9th Gen Intel Core i9 processor, with NVIDIA GeForce RTX 2060 ray-tracing graphics. Amazon Alexa voice control is another included feature.

Other products the company showed off today include a Prime Utopia concept motherboard, as well as a ZenScreen Touch portable monitor. “Asus is honored to have been serving the hardcore tech community, enthusiast, gamers, creators and tasteful consumers for the last 30 years,” Asus chairman Jonney Shih said in a statement about the products that were shown off today. “I am tremendously excited and proud that we have stayed true to our relentless engineering origin on this incredible journey — one that has made us wiser and stronger together.”