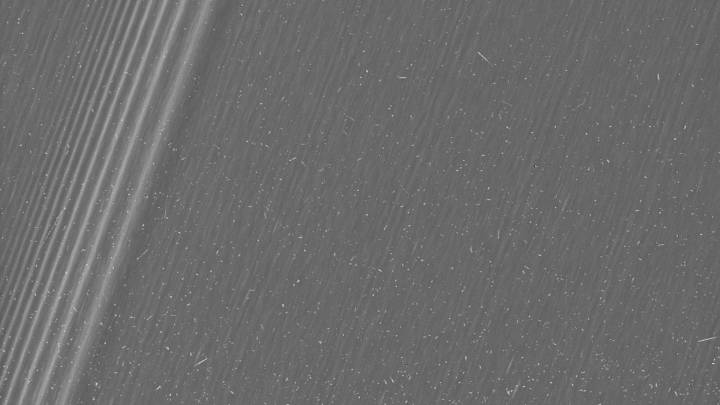 NASA’s consistently surprising Cassini orbiter is rapidly approaching the end of its life, but before it signs off forever it’s been taking some really fantastic shots of Saturn as it swings and dives between the planet’s rings. The latest snapshots sent back by Cassini aren’t just extremely cool looking, they’re also one of the most detailed glimpses of Saturn’s iconic rings ever shot.

Saturn’s A and B rings are both captured in impressive detail in the photos, and you can even make out (relatively) small touches that aren’t typically visible. The small white vertical gashes in the photo of the A ring below are what NASA calls “propellers,” due to their shape. Propellers indicate a disturbance in the gravity near the ring, caused by moonlets which are orbiting the planet. The white specks that dot the image are caused by “cosmic rays and charged particle radiation,” according to NASA. Cassini’s newest photo of Saturn’s B ring is equally impressive, showing off the ridiculously complex structure of the ring. Scientists still aren’t sure what actually produces the intricate pattern itself, but NASA says photos like this could be the key to unlocking the mystery. These new photos are actually shot from a greater distance than those which were taken upon Cassini’s arrival at the planet way back in 2004, however those images weren’t even remotely as detailed as these. Cassini began its series of ring-grazing orbits back in November as part of its last act, and it’s been delivering more and more impressive photos with each passing week. The spacecraft is slated to smash directly into the planet later this year, officially ending its longer-than-anticipated mission.