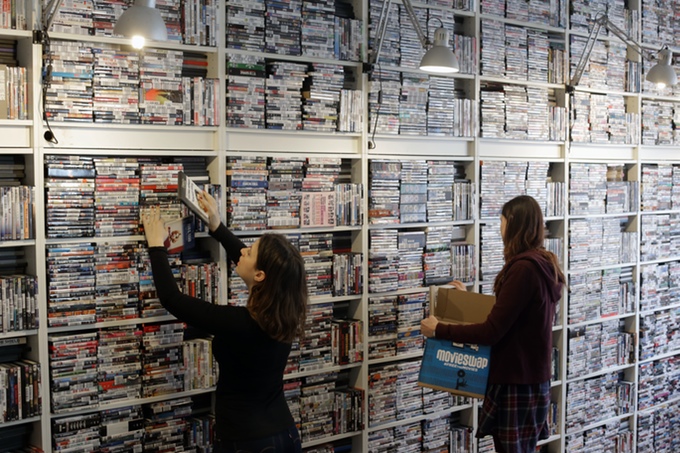 Sharing copyrighted movies online is not legal, and rights owners are still furious about the amount of piracy out there — though many studies have shown that illegal downloads don’t cut into their bottom lines. Of course, sharing DVDs with friends and family is perfectly legal and nobody will come after you for that.

What if a brand new streaming service took that approach to the next level? What if you could share your DVDs with millions of “friends” from around the world, and watch their DVDs just as you’d watch content on Netflix?

For just €5, you can get lifetime access to MovieSwap and early access to the beta of the program this August. That’s the lowest Kickstarter tier for this new campaign, which has already reached its €35,000 goal in the first couple of days after launch.

MovieSwap streaming would be available on Mac, PC and Android, and a special HDMI dongle would bring it to TVs.

Here’s how it works: the team at MovieSwap will take your DVDs, store them in the cloud, and then keep the actual physical DVDs in warehouses. The company says it has collected over 200,000 discs already.

MovieSwap says the process works just like in real life. You can lend a DVD to a friend, “but on a much larger scale thanks to its remote playback technology.” Viewers would get the full DVD experience, including bonuses, deleted scenes and more, and of course a DVD can only be viewed in one location at a time.

However, the fact that you can swap your DVD library with potentially millions of people would certainly enrage studios. It’s one thing to lend your DVDs to friends, and quite another to do the same thing on a larger scale.

Interestingly, the France-based company is backed by Videolan, makers of popular VLC media player, which also a French company.

If some of this sounds familiar it’s because MovieSwap isn’t reinventing the wheel here. In early 2014, a service called Wavelength wanted to let you share your Ultraviolet purchases with anyone using a mechanism similar to what MovieSwap is proposing. However, the service was shut down two weeks after launching because rights holders were outraged.

The video below explains the principles behind MovieSwap, though it doesn’t explain whether you will have to actually own any DVDs to be able to swap movies. We’ll just have to see whether MovieSwap will have a life after this Kickstarter campaign, or whether it’ll be crushed by studios in inevitable legal battles.Until then, €5, or around $5.5 USD, buys you lifetime access to what seems to be a great idea, at least on paper.