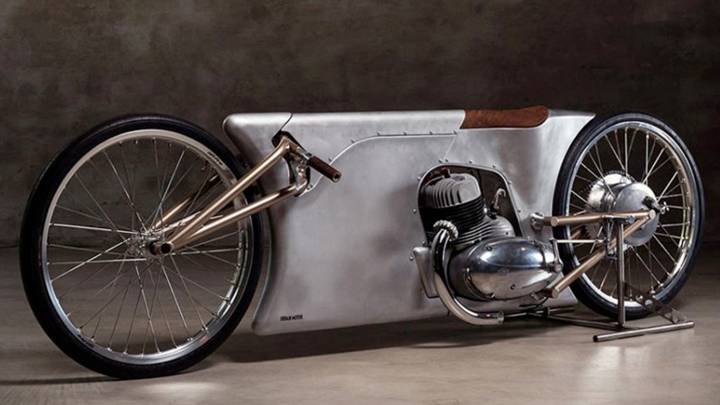 With just two wheels, very little standing between the driver and whatever it is he or she is driving towards, motorcycles are inherently more exhilarating and dangerous than your average car. That excitement is what draws so many to take up motorcycle riding in the first place, and it’s also what makes the decidedly chill name of this utterly insane German cycle concept even more hilarious. This two-wheeled demon is called Easy Like Sunday Morning, and it’s one of a kind.

Easy Like Sunday Morning was built by Urban Motor, a Berlin-based independent motorcycle shop that custom builds its bikes. This particular creation is based around a classic 1964 Jawa 350 two-stroke twin engine, but that’s just about the only think that hasn’t been custom fabricated specifically for the vehicle. The peculiar flat frame leave out important modern bike bits light headlights and turn signals, and the seat is little more than a leather-wrapped indentation in the credit card-like body. The rider straddles the bike in the same way a horse rider latches on to a speeding steed, with legs bent back and arms alongside the bike’s frame. A pair of huge 23 inch wheels serve as symmetrical bookends.

Easy Like Sunday Morning was created specifically to enter a highly popular Glemseck 101 international motorcycle event held each year near Stuttgart, Germany. The event regularly draws nearly 100,000 visitors, making it one of the most popular motorcycle events in all of Europe. With that many motorheads in one place, you have to try pretty hard to stand out. Something tells me this bike did the trick.