Tesla vehicles are jam-packed with advanced technologies and stringent security measures, but the cars still aren’t 100% safe from crafty thieves intent on stealing one. To that point, security cam footage uploaded to YouTube over the weekend shows two thieves stealing a Tesla Model S in England, albeit with a little bit of difficulty.

The owner, who wrote about the incident via a tweet to Elon Musk, said that the thieves used a tablet and a phone to grab the signal transmitted by the Model S’s key fob, an attack that is becoming more and more popular with each passing year. Somewhat comically, the pair of thieves initially couldn’t figure out how to disengage the car’s charging cable, thus prolonging what was supposed to be a quick getaway.

It’s worth mentioning that Tesla vehicles have a few extra layers of theft-protection that this particular Model S owner did not employ. As the Model S owner conceded in his tweet, he did not turn on the PIN To Drive feature:

@elonmusk My @tesla was stolen this morning, with just a tablet and a phone extending my fob range from the back of the house. I get that I should enabled PIN access. I wish it was harder for them to disable remote access though. I can’t track it or disable it. :(

Originally added this past summer, the feature enables Tesla owners to program a private pin that must be entered before the car can be driven. Another security measure Tesla owners can take advantage of is turning the Passive Entry feature off. This effectively prevents the car from automatically unlocking when the vehicle’s key fob is nearby. Though arguably an unnecessary inconvenience that removes one of Tesla’s slicker features, it’s definitely something you may want to keep in mind when parking in public places or in areas where a car may be more prone to theft.

In any event, the aforementioned video of the Model S theft can be seen below:

Incidentally, the vast majority of stolen Tesla vehicles are recovered, as illustrated by this chart via Marketwatch. It’s not quite a 100% recovery rate, but it’s pretty close. 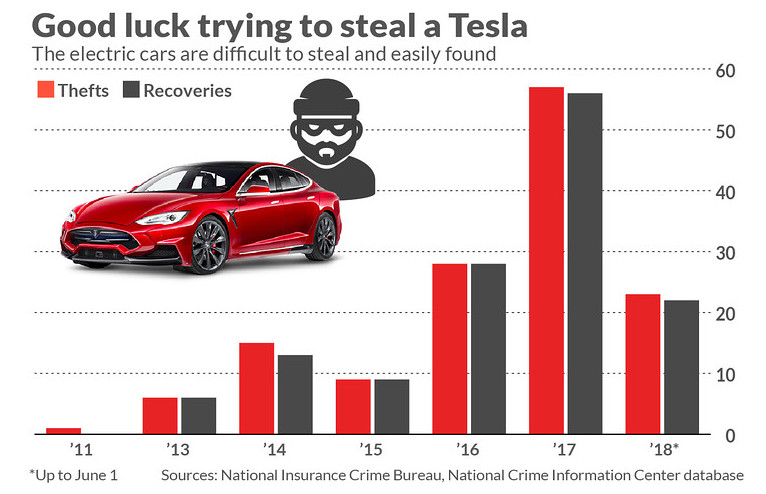