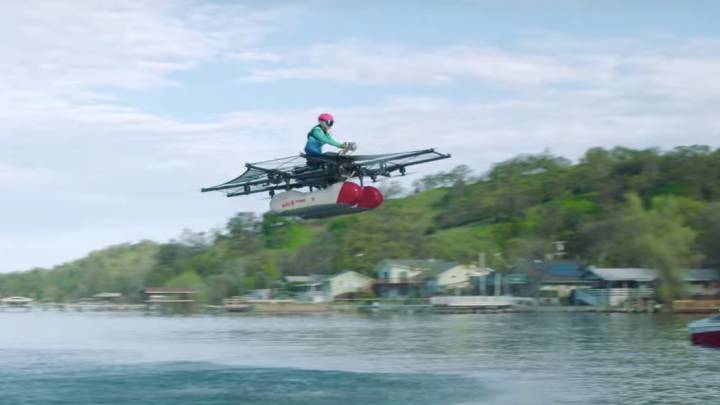 Forget about self-driving cars for a second and imagine yourself “driving” a flying car. It may happen as soon as this year, as at least one company is looking to deploy a commercial version of a mini helicopter that you’d be able to fly yourself. However, it’ll be a few years until these flying cars will be allowed to merge with regular car traffic — if that will ever happen.

Kitty Hawk, a company that’s backed up by Google legend Larry Page, plans to launch the Flyer by the end of the year. You can already sign up for a three-year membership that costs $100 and will net you $2,000 off of the retail price. However, it’s unclear at this time how much the Flyer itself will cost.

For the time being, the Flyer won’t be allowed on public roads. Or above them. The device operates in the FAR 103 Ultralight Category of US FAA regulations, which means you won’t need a pilot’s license and may be flown in uncongested areas for recreational purposes.

The Kitty Hawk test flying car that was recently used in California “looked like something Luke Skywalker would have built out of spare parts,” according to The New York Times.

“It was an open-seated, 220-pound contraption with room for one person, powered by eight battery-powered propellers that howled as loudly as a speedboat,” the report notes.

The final version of the Flyer will likely be more quieter when it launches, though it might not look like a car at all.

The Times says that Page isn’t the only entrepreneur chasing this dream. There are plenty of companies in the US and around the world looking to develop flying cars. Airbus is one of the most prominent rivals, given their extensive expertise in making things fly.

In addition to regulation and safety, there’s one other concern that needs addressing before such devices become commercially available: battery life. It’s unclear how long a Kitty Hawk drone would be able to fly.

A video below shows Page’s flying contraption in action. And this is how it feels like riding one. Meanwhile, I can’t but wonder how much we’ll have to wait for self-driving flying cars to arrive.