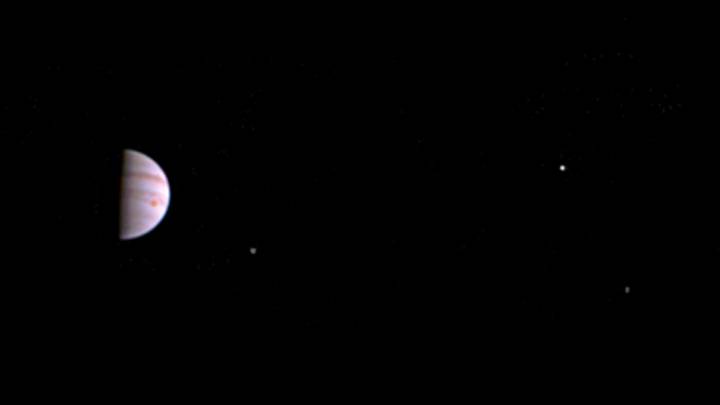 NASA’s Juno probe made history last week when it successfully entered into Jupiter’s orbit after a solitary five-year journey to space. And now, Juno is beaming back images from its orbit.

On July 4th, the probe entered orbit within a second, and a centimeter of its target, The Washington Post explains, after slowing down from speeds of upward of 125,000 mph.

The first images were taken from roughly 2.7 million miles away from the distant planet, which is about 11 times as far as the moon is from Earth. The picture above shows the planet’s Great Red Spot, an “ancient, mysterious storm,” that started to shrink, as well as three of Jupiter’s four largest moons, including Io, Europa, and Ganymede. An animation of it follows below.

What’s also interesting about this first picture is that it proves Juno survived the first pass through the planet’s extreme radiation environment without any degradation.

The probe will continue to take pictures from Jupiter, as the probe is supposed to circle Jupiter 37 times, with each orbit lasting 53.5 days. The pictures should help scientists better understand the planet and its features, but many of them will also be posted online, including high-resolution images.

The closest Juno will get to the planet will be 2,600 miles, which is as far as New York is from Los Angeles, the Post says.