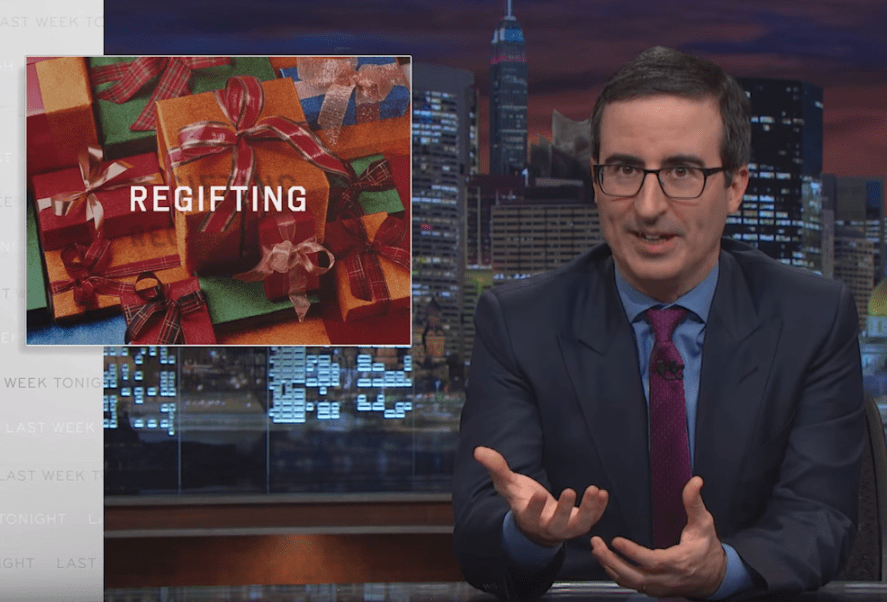 Last year, my father-in-law gave me a Qbos USB-Powered Bladeless Fan Multi-Media Speak & Mic as a Christmas present. This was a gadget that he received as a free gift at his local casino that he then regifted to me and it was one of the absolute worst gadgets I have ever seen. I threw the device away but a new video from John Oliver has convinced me that maybe I should have tried to regift it to someone else instead, although I don’t think on good conscience I could go through with it.

MUST WATCH: The first trailer for ‘Independence Day: Resurgence’

Before you regift something, however, you should be sure to watch all of Oliver’s tips for the best regifting practices. First, Oliver says you shouldn’t regift something to anyone who knows the original gifter, since news of the regift will inevitably get back to them, especially if it’s something like an engagement ring.

Instead, you should save all your regifts for office holiday parties, where expectations for gifts are already pretty low.

“Regifting there is like peeing in the ocean,” Oliver cracks. “Sure, it’s not right but it’s an ultimately harmless solution to an urgent problem.”

Oliver also recommends at least putting any regifts into a gift bag, which he describes as the sweatpants of gifting.

“Sure, it’s lazy, but it’s better than not putting on anything at all,” he says.

Check out Oliver’s whole list of regifting tricks below.