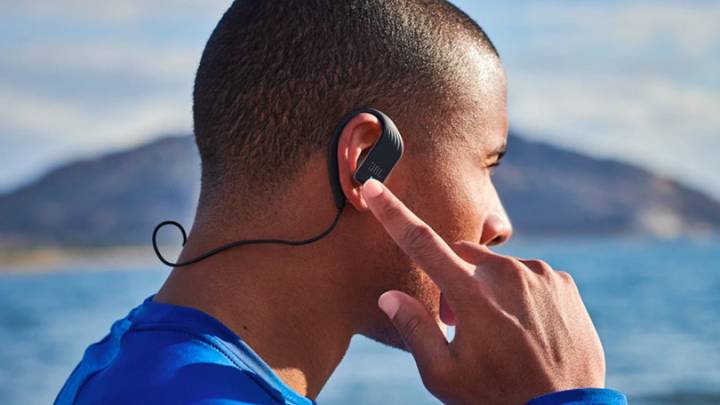 Ever since Apple released the Airpods, the tech industry has taken a violent swerve towards “truly wireless” earbuds. A design that was once reserved for kooky Bluetooth earpieces has become mainstream, and separated wireless earbuds are slowly taking over the casual wireless headphone market.

But no matter what Sir Jony says in his dulcet beknighted voice, Airpods (and anything else without a connecting wire) still suck for working out. Headphones still fall out, and even if they don’t, sometimes you want to pull one earbud out to talk to someone, and you don’t want to stick your $200 plastic into a sweaty gym short pocket.

In other words, semi-wired (connected wire? We need a better name for this) headphones are here to stay, at least for a handful of niche applications. But that doesn’t mean that the traditional workout headphone design can’t be improved, and I think the JBL Sprint Endurance are a good try and making the conventional Bluetooth headphone a little bit better.

The key difference between the Endurance and most other workout headphones is that it moves all the heavy stuff into a plastic arm that wraps around your ear. The result is an earbud that’s carefully supported on your head, and only a single thin wire connects the two earbuds, with no three-button control or battery pack to get in the way, unlike most other designs.

This means that when you move around or run, there’s no unsecured weight bouncing up and down. It might sound minor, but I’ve found that over the course of a 30 minute run, something as miniscule as an inline mic can provide enough bounce to slowly tug an earbud out. This doesn’t happen with the Endurance.

Most of the other design details hit the mark. The headphones are waterproof (a claimed IPX7 rating; I had no problems running in the rain) without needing a rubber flap over the microUSB charging port, which cuts out a common point of failure on other headphones. The sound quality is more than adequate for workouts, and the battery life lasted me an average of 9 hours of listening with a mixture of Bluetooth and iOS devices, so you can go a couple workouts between charges.

Best of all, the price is an inoffensive $50. For a pair of waterproof, wireless headphones that have a solid design, good fit, and inoffensive sound, that’s a steal.