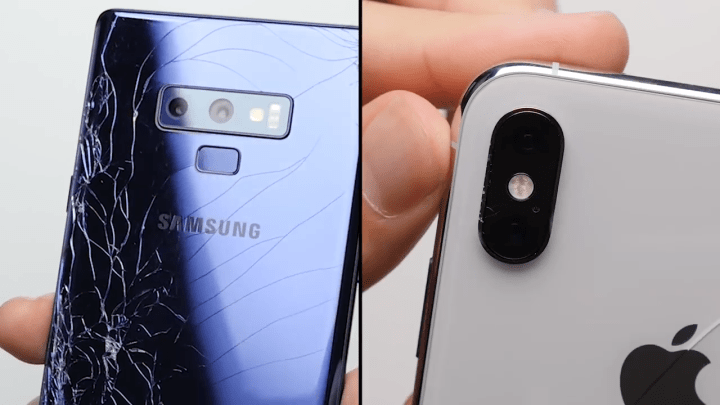 It’s a battle of two of the largest smartphones on the market as drop test expert PhoneBuff on YouTube pits the new iPhone XS Max up against Samsung’s Galaxy Note 9. At the beginning of the month, shortly after the Galaxy Note 9 launched, PhoneBuff put Samsung’s latest flagship to the test against the iPhone X in a drop test showdown which the iPhone won (though not by much). So how does Apple’s biggest phone ever stack up?

If you watched Apple’s keynote live stream earlier this month, you might remember that the company referred to the glass on the iPhone XS and XS Max as “the most durable glass ever in a smartphone.” For a phone covered in glass, the iPhone X was already surprisingly durable, but how would a much larger phone fare?

As it turns out, the iPhone XS Max passes a majority of the tests with flying colors. Once again, the first drop shatters the back of the Note 9, while the XS Max suffers far less damage. Both phones held up incredibly well after the corner drop, with the screens fully intact and little more than scuff marks on the corners in terms of damage. Finally, on the front drop, the iPhone once again topped the Galaxy by keeping the cracks on its display contained.

But in the bonus round, which consists of dropping each phone from a significant height up to ten times until they stop functioning, the XS Max failed three rounds in. The Note 9, on the other hand, lasted all ten rounds. This was enough to give the Galaxy Note 9 a one point edge in the final score, but both performed admirably.