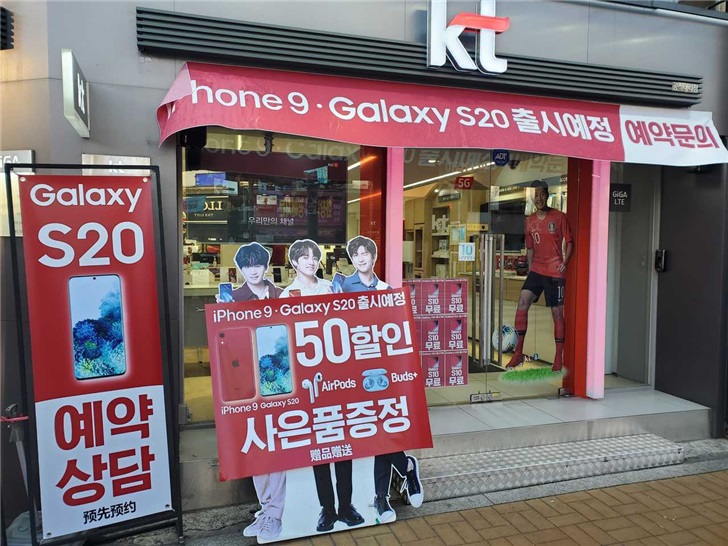 In addition to the iPhone 12 series this fall, Apple is expected to launch a follow-up to the iPhone SE at some point in the spring, but six days into February, there’s still been no official word from the company about any event where the phone might make its debut. That hasn’t stopped countless leaks from trickling out online, and now, we might have gotten confirmation of the phone’s existence from an unlikely source overseas.

On Thursday, Chinese technology news website cnBeta shared two photographs of a Korea Telecom (KT) retail store with signs out front promoting reservations for both Samsung’s Galaxy S20 and Apple’s iPhone 9 — neither of which have been announced by their respective vendors yet. As you can see above, the signs look a bit sketchy, but KT is one of the three major mobile carriers in Korea, so we can’t discount them entirely.

Beyond potentially confirming the name and imminent release of the iPhone 9, the signs also suggest that preorders for the phone have either already begun or will begin soon. Plus, KT appears to be offering a free pair of AirPods with an iPhone 9 preorder, as well as free Galaxy Buds+ with a Galaxy S20 preorder.

We also get a look at what might be the final design of the iPhone 9, which is expected to feature a similar design to that of the iPhone 8. This could just as easily be a render from a recent leak as a marketing image, but providing the leaks haven’t been completely off base, it seems likely the phone will look something like this.

Previous leaks have suggested that the iPhone 9 (previously referred to as the iPhone SE 2) will feature the same A13 processor as the iPhone 8, 3GB of RAM, and the return of the Home button with Touch ID. There will be both a 64GB model and a 128GB model, and the iPhone 9 is expected to launch in black, white, and red color options. As always, we’re going to take this leak with a grain of salt, but if KT is indeed taking preorders for the iPhone 9, Apple could be just days away from formally announcing the iPhone 9 online or at a spring event.