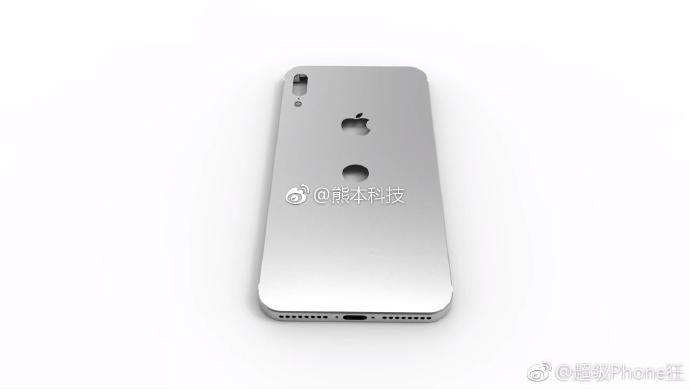 We’ve seen leaks and heard rumors that suggest Apple could put the Touch ID sensor on the back of the iPhone 8. Someone’s now taken the time to render what that would look like, and somehow, it actually looks worse than I’d imagined.

The casing render comes from Weibo, and seems to be based on the schematics that Sonny Dickson leaked earlier this week. We have the same cut-out for the Touch ID sensor on the back, the same dual camera module, and other details from the same set of leaked schematics like screw holes.

Putting the fingerprint sensor on the back would be a logical engineering move for Apple. This year’s design trend has been to have edge-to-edge displays with no bezel, and that includes no bottom bezel. With nowhere to put a physical home button, Apple would either have to shift the Touch ID sensor to the back, or use some technology that lets the screen itself read a fingerprint.

Apple has filed numerous patents for an under-screen fingerprint reader, but it’s unclear if the tech is mature enough to put in a consumer phone this year. With so much hype and stock price riding on the iPhone 8, Apple might be forced to ship the device this year, even if it involves making a huge compromise in design — like putting a fingerprint sensor on the back.

In case you’re wondering why a fingerprint sensor on the back is a bad idea, just look at reviews of the new Galaxy S8. Although it’s a fantastic device in nearly every way, reviewers have universally found that the rear-mounted fingerprint sensor is way too close to the camera lens. You’re far too likely to hit the lens when you go to unlock, meaning smudged photos and unhappy customers.

It’s still very possible that Apple has another plan up its sleeve. This render is still based on one dubious set of schematics, which could well be a fake, made by messing with the schematics for the current iPhone 7 Plus. It’s also early enough in the year that Apple is likely still experimenting with a number of different devices, before deciding which design to ultimately go with for manufacturing. Even if it means a few months of pain, it’s easy to see Apple delaying the iPhone 8 launch until after Christmas to get it right. With so much on the line, I’d like to think that Apple won’t be dumb (or courageous!) enough to ship a phone with such an obvious design flaw.