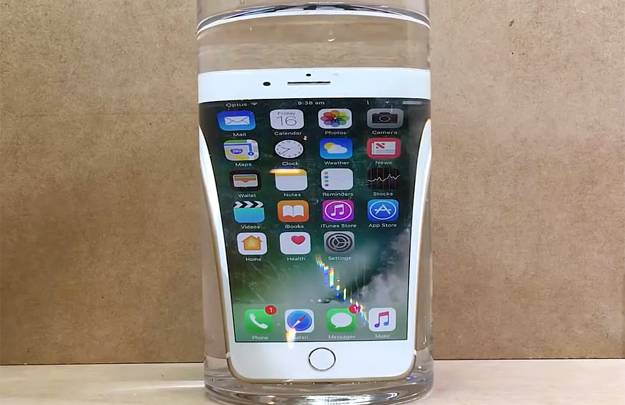 Apple’s hot new iPhone 7 and iPhone 7 Plus have officially been released, which means millions of eager Apple fans are going to get their hands on new iPhones over the course of the next few days. Most of those iPhones will be put to use as you might expect a smartphone to be used. A select few, however, will be brutalized, battered and beaten all for your viewing pleasure.

We’ve already seen some pretty brutal iPhone 7 torture tests — definitely check this out if you missed it earlier — and now its time to test Apple’s claim that its new iPhone 7 and iPhone 7 Plus are water-resistant.

Now that Apple’s next-generation iPhones are widely available, we’ll see a flood of YouTube videos that look to test out Apple’s claim that the phone is water-resistant. We should be clear in stating that the phone is absolutely not waterproof — no smartphone is. According to Apple, the iPhone 7 and iPhone 7 Plus have an IP67 rating for dust- and water-resistance. Where water is concerned, that means the phones can be fully submerged in up to 1 meter of water for up to 30 minutes without being damaged.

Will your iPhone 7 be toast if it takes a brief dip in water that’s deeper than 1 meter? No. Will it survive 45 minutes in an inch or two of water? Yes. The takeaway here is that you should never intentionally submerge your iPhone in water, but accidents happen and your new handset will likely survive if and when they do.

With that out of the way, check out these two videos (via 9to5Mac) of Apple’s iPhone 7 water dunk tests. The first shows the phone being submerged in a glass of water and in some hot coffee, while the second takes place in the ocean — salt water tests are a particularly bad idea that you should never try at home (or rather, at the beach).

Will the iPhone 7 survive both tests? There’s only one way to find out.