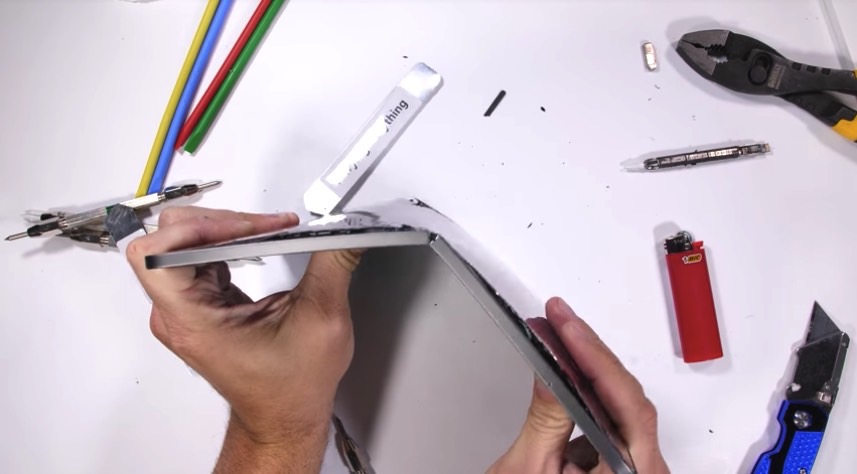 Apple unveiled its newest iPad Pro models a few weeks ago, which come in 11-inch and 12.9-inch variations. Both models come with new all-screen designs, Face ID support, and a monster A12X Bionic chip under the hood. Both tablets are smaller than the models they replace as well and are even thinner than before.

But, it turns out, the iPad Pros can be bent with your bare hands, so you’d better make sure you protect yours accordingly, and avoid placing it in areas where it could be easily damaged.

Well-known YouTube channel JerryRigEverything put the iPad Pro through the various durability tests, a ritual we’ve seen before for every new flagship mobile device, and especially smartphones. As you’ll see in the video below, the metal can be scratched easily, but you won’t damage it. The screen will survive scratches about as well as any phone, too:

But the tablet can be bent without much effort, as you’ll see in the clip. While this will remind people of the iPhone 6’s “Bendgate” issues, which Apple fixed, the comparison isn’t warranted. For starters, phones are a lot more compact than tablets, which means they should be a lot more durable. Furthermore, you don’t put iPads in jeans pockets as you do with phones, so that type of accidental bending is not likely to occur.

As The Verge rightly points out, other iPad models can also bend a lot easier than iPhones, so it’s not like this is a major discovery.
Even so, the video shows that it’s quite easy to bend the iPad Pro, and you should be mindful about how you transport it, or where you leave it around the house. You won’t want anyone to sit on it, or have it bend while you’re lugging it around in a backpack or suitcase.

As JerryRigEverything owner Zack Nelson explains, the iPad bends along the middle because there are holes in the aluminum frame on either side. The bigger cutout is found on the right side of the tablet, and it’s needed to charge the new Apple Pencil wirelessly. On the left side, meanwhile, there’s a microphone hole. The Apple Pencil, by the way, is even less durable than the tablet. Then again, these devices aren’t supposed to be indestructible, so pay attention to how you treat them.

While he criticizes the iPad Pro design in this clip, Nelson a few weeks ago put the iPhone XS through a series of drop tests, praising Apple for the build quality of the new phones, as the test results were a lot better than he had anticipated.