iOS 13.1.3 now available to download on iPhone and iPad

Apple has been seeding iOS 13.2 and iPadOS 13.2 beta releases at a furious pace in recent weeks, and we expect them to be available for all iPhone and iPad users soon, but in the meantime, the iOS 13.1 updates are still rolling out. On Tuesday, Apple released iOS 13.1.3 and iPadOS 13.1.3 with another round of bug fixes for what is turning out to be one of the messier software updates in recent memory for Apple.

Here are the full release notes, so you know exactly what you’re getting when you install the update: 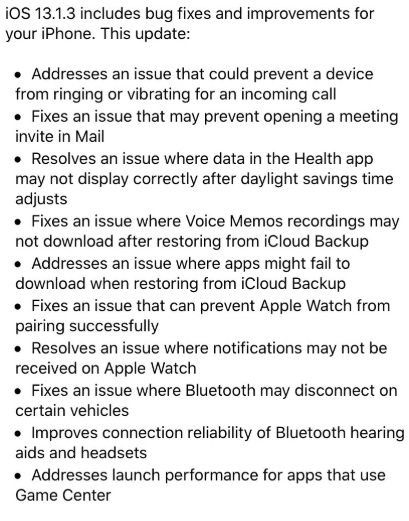 If you’re wondering whether or not your device is compatible with iOS 13.1.3 or the iPadOS 13.1.3 release that also rolled out on Monday, we wrote up a full list below that contains every compatible device:

In order to install the new iOS 13.1.3 or iPadOS 13.1.3 updates on your iPhone, iPad or iPod touch, you just need to head to Settings > General > Software Update and then tap “Download and Install” at the bottom of the page. If you want, you can also install the update through iTunes by connecting your iOS device to a computer.