Since its release last week, we’ve been diving into many of the great new features iOS 10 brings to the table. From enhanced Siri functionality to slick 3D touch enhancements across the board, iOS 10 is certainly not lacking in the feature department. On top of it all, iOS 10 as far as I can tell appears to be one of the most stable iOS x.0 releases we’ve seen in quite some time.

Still, there are a few areas where iOS 10 takes a step backwards. There is of course the frustrating new design of iOS’ Control Center, but for now we’re going to focus on how iOS 10 makes it much more challenging if not downright annoying to save photos from the web to your device.

The short of it is this: if you initiate a long-press on an embedded webpage photo in iOS 10 Safari, the ability to select a “Save Image” option has completely disappeared if the image also operates as clickable link.

As an illustration, here’s what happens when I try and save an image on an iPhone running iOS 9.5. If I tap and hold on the photo below of Andrew Luck, a “Save Image” option appears whereupon I can quickly save the photo directly to my camera roll. It’s efficient, convenient, and incredibly useful. 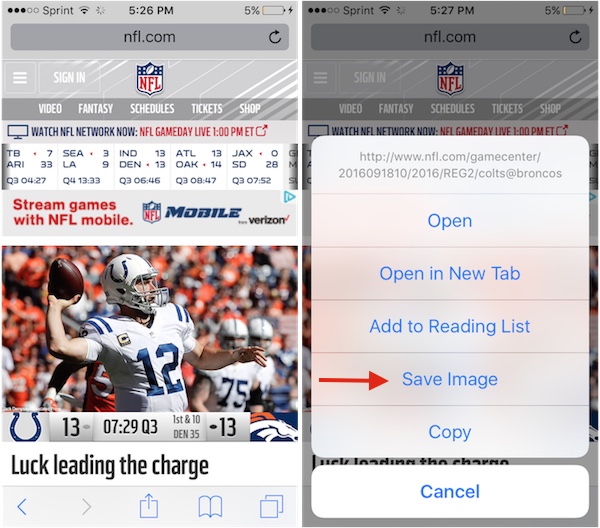 Here’s how things look in iOS 10, however. When I try and long press the main image on the same NFL.com splash page, I’m stuck. Hitting the ‘Copy’ option simply copies the URL that the image points to. Again, if the image itself wasn’t a clickable link, the ‘Save Option’ button would appear; and while that’s all well and good, the reality is that many sites on the web use photos with embedded links which makes this an annoying problem to deal with. 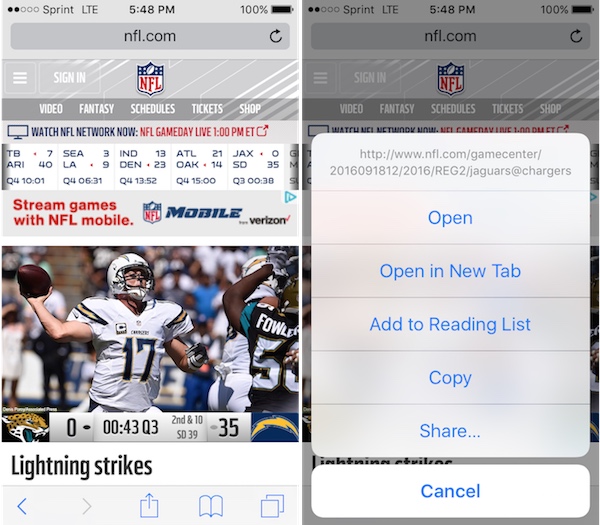 Consequently, the only way to save the photo of Philip Rivers above is to take a snapshot of the entire screen, go to my Photos album and then crop the photo to my liking.

What kind of nonsensical usability is that?

Hopefully this wasn’t a purposeful design decision as this would represent a inexplicable and frustrating step backwards in usability. Apple obviously has bigger fish to fry, but hopefully they’ll address this software shortcoming in an upcoming iOS 10 update.